From the Metropolitan Museum website, the "Art and Oracle - African Art and Rituals of Divination" special exhibit. Notice the use of serpent iconography and its association with fertility.
Divination Dice (Hakata) 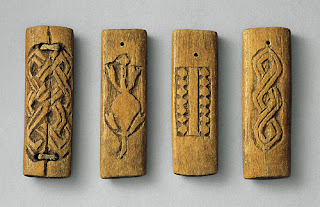 Divination Dice (Hakata)
Sets of dice (hakata) are the quintessential Shona instruments used to divine the source of illness or personal misfortune. These consist of a series of four miniature tablets, made of wood, ivory, or bone, each with a distinct design motif inscribed on one side. According to Shona conceptions of experience, personal difficulties—ranging from unemployment or poor grades in school to the death of one's livestock—may all be attributed to some spiritual agency. Consequently, a distinction is made between medical treatment of certain ailments and a diviner's probing analysis and diagnosis of the ultimate cause of a client's problems.

To arrive at these insights, Shona diviners use one of two divination methods. The first involves spirit possession. Diviners who rely on this method to direct their inquiries enter into a trance at the beginning of a session. Any pronouncements they make while they are in this state are attributed to the spirits that they host. The same spirits that communicate to diviners in trance may also reveal knowledge about a client's welfare through the medium of the hakata. The divining dice are regarded as the physical embodiments of these insights, presented through the configuration in which they arrange themselves after being cast onto a surface by the diviner. In order to operate effectively and sharpen their visionary potential, dice must periodically be ritually purified or "medicated" by a diviner. Although dice sets are most commonly used for this form of divination, diviners may also employ collections of shells, seeds, or bones. This practice is also found among neighboring Venda, Tsonga, and Batoka peoples.

Family heads have their own set of hakata, used mostly for inquiries into matters that concern the family's interest and well-being. However, for investigations of more serious problems caused by sorcery, a professional diviner (nganga; plural, banganga) must be consulted. Although diviners are expected to be able to diagnose a client's problem without any advance knowledge of his or her case history, some of them experience revelatory dreams before the consultation takes place.

Before each casting, the diviner directs specific questions to the hakata. When the dice are cast, the ones that fall face up form a configuration through which affirmative or negative responses are articulated. There are sixteen possible throws, each of which has a name and a range of interpretations. Many highly skilled diviners throw four or eight sets of dice at a time in order to achieve a more complex and nuanced interpretation of a situation.

The earliest description of the use of hakata divination is documented by a Portuguese visitor to the region in 1586:

All these [people] before undertaking anything, whether it be a journey, business or planting, cast lots to discover if the issue will be fortunate or not, and if the lot is not favorable they put off their business for that day. . . . These pieces of wood, or lots, the [people] call "chacatas," and every [man] carries these "chacatas" with him threaded on a string in order to use them when any doubt arises. In such a case he throws them, as we throw dice, several times, and they say that they are thus shown whether a thing be good or evil.

The longevity of hakata designs and their widespread resonance are both suggested by the fact that divination instruments of this kind, as well as stonework displaying a similar aesthetic, have been found in various archaeological sites. Ivory palettes featuring carved lions, which may have been part of a set of divining dice, were uncovered among the hill ruins of Khami, the capital of the Torwa state (1450–1700). Furthermore, the design motifs that appear on most contemporary dice resemble those on the masonry of numerous architectural structures and on one of eight soapstone birds discovered at the site of Great Zimbabwe, dating from 1250–1500. In light of this, hakata symbolism and design have been proposed as relevant clues in interpreting the spatial layout of elite architectural structures built by Iron Age ancestors of the Shona.

The standardized motifs that appear on hakata implements correspond to four identities, representing different ages and genders and symbolizing essential aspects of the life force, such as wisdom and fertility. The set shown here consists of (from left to right) khami, representing old and senior women, in the form of a double-knot interlace; chitokwadzima, old and senior men, in the form of a crocodile; chirume, young and junior men, as two parallel bands of lozenges; and nhokwara, young and junior women, as a single band of interlace.

There is a wide range of formal variations on these basic design configurations. The "old man" form is often alluded to abstractly by a variety of circle and dot motifs and by pitted designs that may refer to crocodile skin. Crocodiles are associated with sacred leadership in part because of their dangerous, ferocious, and fearless behavior. Most important, they can communicate with the ancestral world at the bottom of deep pools of water. "Old woman" is always represented by a pair of small, identical designs that resemble portions of "old man" or "young woman" design elements and stands for the unity of the family. "Young woman," represented by twisted snakes or other interlaced designs, is associated with fertility. "Young man" is characterized as a python and is identified with rain and the fertility of the land.

The design and use of hakata reflect the convergence of diviners' and artists' sensibilities. Not only are diviners the primary patrons of artists in Shona society, but the two share the same source of divine inspiration in practicing their respective vocations. Some individuals may have dreams in which they are called on to become diviners by relatives who were themselves banganga, after which they are inhabited by a spirit (shave). Similarly, the careers of artists are often launched by a diagnosis of an affliction signifying that an ancestor desires them to develop the skills of a sculptor or blacksmith. The creativity involved in the design of traditional Shona forms of expression does not reflect an emphasis on originality on the part of the individual artist. Instead, it too is conceived of as the product of divine inspiration communicated by the shave.
Posted by Jan at 2:31 PM