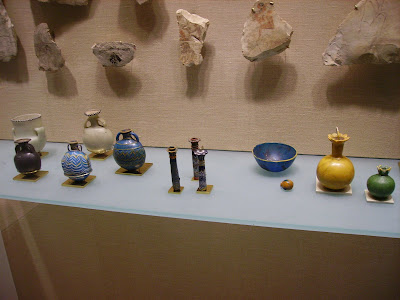 An appropriate article, given the talk that dondelion and I attended at the Met on May 13th about ancient Egyptian medical practices! (Photo: Taken at the Met on May 13, 2009, this was one of the stops during the lecture on ancient Egyptian medicine. The green and yellow jars on the right are shaped after the poppy plant and would have held medicinal drafts using poppy). Story at toledoblade.com Article published May 04, 2009 Scientists use chemistry to identify herbs in Egyptian medicines By TOM AVRILPHILADELPHIA INQUIRER PHILADELPHIA - Ancient Egypt was renowned for its prowess in the field of medicine, so much so that sick people went there from abroad in search of herbal remedies. Archaeologists know that the herbs were administered in a potent blend with wine. But the identity of many of those medicinal additives is a mystery - their names recorded in hieroglyphics that have resisted modern efforts at translation. Now, two University of Pennsylvania scientists have begun to crack the puzzle with chemistry. In research published in April, the pair reported some of the earliest evidence of just what those long-ago physicians were prescribing. One Egyptian clay jar, estimated to be more than 5,000 years old, yielded flaky residue that suggests a veritable apothecary of possible ingredients: coriander, senna, germander, balm, and savory, among others. Samples scraped from the inside of a newer jar, just 1,500 years old, yielded compounds that likely came from rosemary. The research, done in collaboration with a chemist from the U.S. Treasury Department, is more than a quest for history. Senior author Patrick McGovern, an "archaeochemist" at Penn's Museum of Archaeology and Anthropology, wants to know if the ancient herbalists came up with anything that really works. Researchers at Penn's Abramson Cancer Center are similarly intrigued, and already are studying herbs identified in some of Mr. McGovern's previous experiments. A derivative of the wormwood plant, found in a 3,200-year-old fermented beverage from China, has shown some promise against tumor cells in preliminary lab studies. "I think people should be open-minded" about ancient remedies, said Wafik S. El-Deiry, a Penn professor of medicine, genetics, and pharmacology, "because there may be hidden treasures." The Egyptians and Chinese of old weren't trying to use their herbs against cancer, as far as Mr. McGovern knows. But some of their medicines are used today for the same purposes as long ago. One such example is fennel, to combat indigestion, said Lise Manniche, an assistant professor of Egyptology at the University of Copenhagen. The Penn study found no evidence of fennel, but it is among those plants whose names have been translated from the ancient texts. Ms. Manniche said the new evidence, published in the online edition of Proceedings of the National Academy of Sciences, represented an ideal marriage of chemistry and archaeology. "It's absolutely fascinating that such a small amount [of residue] can give us so much information," said Ms. Manniche, who was not involved with the study. Both clay jars came from Egyptian tombs. The 1,500-year-old vessel is owned by the Royal Ontario Museum in Toronto; the one that dated back five millennia was excavated by German archaeologists from the tomb of ruler Scorpion I. In both cases, the wine residue was scraped from the jars and simply sent to Mr. McGovern by mail. The chemist can't say exactly which herbs were used in the wine. The analysis of the older jar revealed only that the residue contained certain "terpenoid compounds" - the presence of which could be explained by one or more herbs. It is also unclear which diseases they might have been used for. Egyptian physicians recorded diseases and their treatments in hieroglyphics on papyrus documents that have survived to this day. But with many of the remedies, modern scholars know only that they consisted of some sort of plant - signified by a picture of a leaf at the end of the name, Ms. Manniche said. Mr. McGovern's co-authors were Penn research associate Gretchen Hall and Armen Mirzoian, a senior chemist at the Treasury Department's Alcohol and Tobacco Tax and Trade Bureau. Here is the link to the article at the PNAS website. For general information about ancient Egyptian medical practices, see Medicine in Ancient Egypt.
Posted by Jan at 9:36 AM