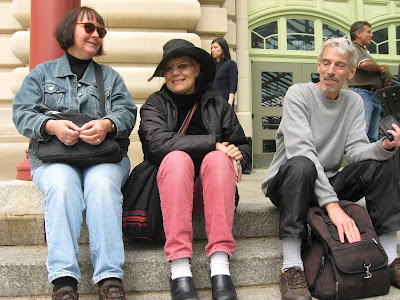 Whew! It's nearly midnight (Milwaukee time) and we've been up since 6 a.m. and going non-stop. Today was a travel day, and you know how that is! Trip back from New York was on time and uneventful except for the fact that our boarding passes sent us to the wrong frigging gate! There I was sitting comfortably reading the New York Times at 11:10 a.m. telling Mr. Don he was nuts because he kept saying to me that our plane was boarding at Gate B1, not Gate B3 where we were sitting. I kept saying Mr. Don, our plane is not leaving until 11:35 from Gate 3, where we are sitting. Well, he was right, so fortunately we made the flight! Got home, changed into shorts and tee shirts and bare feet because it's HOT here! The yard is overgrown - we will pull out the lawnmower tomorrow and cut the grass. We sat out on the deck the rest of the afternoon just decompressing and communing with nature, savoring the quietness of suburban Milwaukee after the non-stop hub-bub of New York City. We both took 2 hour naps later in the afternoon. Then we walked to the supermarket - a real supermarket, not what passes for one in Midtown Manhattan - to pick up much-needed groceries. Tomorrow night I'm going to make a tasty pot roast for Mr. Don. When we got back home I made a large supper for us - a late supper - using handy-dandy frozen stuff mostly, and some fresh ingredients. Meat lasagna, a relish dish, mixed veggies. Mr. Don filled his hollow leg and was a happy man. Then we looked at our website stats and did an analysis. Now Mr. Don is upstairs shooting zzzzz's at the ceiling and I'm about to call it a night, too. Very sad - my squirrels did not come when I whistled. One of the first things I did after I fetched the mail and newspaper was run to the back of the house to open up the patio door to the deck and check the back yard. I refilled the birdbaths with fresh water, put out new food for the birds and whistled for the squirrels to come eat. A few squirrels did show up around 6 p.m. and they got the benefit of the almonds and peanuts I put out for them. I expect that once the word gets out on the Squirrel Hot Line, more will show up in the coming days. They have to get used to people being around here again, and food being available again. Will try and blog more tomorrow about the New York trip - much left to write about and of course we have TONS of photos which will eventually end up somewhere, probably in an album linked to Goddesschess. For now, it's time for me to shoot some of my own zzzzz's at the ceiling! The photo above was taken by Michelle at Ellis Island on May 16th. It's me, Isis and Mr. Don in a candid shot after Mr. Don had just said something either extremely ridiculous or extremely funny (take your pick).
Posted by Jan at 11:50 PM