Is the Nefertiti Bust a Fake? 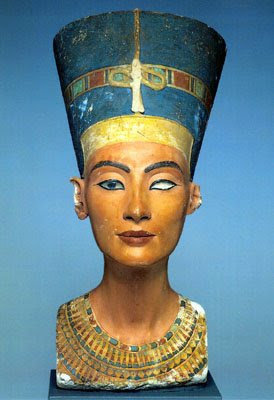 I'm catching up with stories now that I'm back home from New York. Still on vacation, don't go back to the office until the 26th, yippee! This next story from the guardian.co.uk is, frankly, just so far out there - but the book will probably sell because the subject is controversial. Is this Nefertiti – or a 100-year-old fake? Kate Connolly in Berlin guardian.co.uk, Thursday 7 May 2009 19.24 BST Her elegant and chiselled features held proud and high on a swanlike neck, she has been smiling serenely for 3,400 years. At least that has long been the popular and scientific belief that draws half a million tourists to see her in Berlin every year. But now doubt has been thrown on the authenticity of the painted limestone and plaster bust of the 18th dynasty Egyptian queen Nefertiti by two authors who claim she is a fake. According to a Swiss art historian, the bust is less than 100 years old. Henri Stierlin has said the stunning work that will later this year be the showpiece of the city's reborn Neues Museum was created by an artist commissioned by Ludwig Borchardt, the German archaeologist credited with digging Nefertiti out of the sands of the ancient settlement of Amarna, 90 miles south of Cairo, in 1912. In his book, Le Buste de Nefertiti – une Imposture de l'Egyptologie? (The Bust of Nefertiti – an Egyptology Fraud?), Stierlin has claimed that the bust was created to test ancient pigments. But after it was admired by a Prussian prince, Johann Georg, who was beguiled by Nefertiti's beauty, Borchardt, said Stierlin, "didn't have the nerve to make his guest look stupid" and pretended it was genuine. Berlin author and historian Edrogan Ercivan has added his weight to the row with his book Missing Link in Archaeology, published last week, in which he has also called Nefertiti a fake, modelled by an artist on Borchardt's statuesque wife. Public and political enthusiasm about the find at the time gave the artefact its "own dynamic" and led to Borchardt ensuring it was kept out of the public gaze until 1924, the authors have argued. He kept it in his living room for the next 11 years before handing it over to a Berlin museum, since when it has been one of the city's main tourist attractions. The statue was famously admired by Adolf Hitler, who referred to it as "a unique masterpiece, an ornament, a true treasure". Recent radiological tests carried out on the statue by Berlin's Charite hospital supposedly proved that the bust is indeed more than 3,000 years old. The tests uncovered a hidden face carved into the statue's limestone core. But Stierlin has argued that while it is possible to carbon date the pigments, which appear to be ancient Egyptian, it is impossible to accurately date the bust because it is made of stone covered in plaster. Other aspects of the find, which he has claimed support his theory, are the facts that the bust has no left eye, which the ancient Egyptians would have considered a sign of disrespect towards their much-loved queen, and that the first scientific reports on the discovery were not written up for 11 years. Borchardt's diary entries remain the main written account of the find. He wrote: "Suddenly we had in our hands the most alive Egyptian artwork. You cannot describe it with words. You must see it." But Dietrich Wildung, the director of Berlin's Egyptian Museum, where Nefertiti is currently housed, has fiercely dismissed the allegations as an attempt to exploit the bust's popularity. "A beautiful woman and a putative scandal," he said. "That always sells." He said the claims could easily be dismissed because of the detailed computer tomography and material analyses that had been carried out on Nefertiti. In October, the bust is due to be moved back into the Neues Museum, which has been reconstructed from its war-torn remains by British architect David Chipperfield, and where Nefertiti was last on display 70 years ago. She is to hold court over a long gallery in the north cupola, where she will be set on a specially constructed pedestal. Over the decades Germany has rejected repeated requests from Egypt for her return. Sun queen The bust is said to portray the wife of the Sun King Akhenaten, with whom she is believed to have ruled Egypt between 1353 and 1336BC. It is thought to have been uncovered in the desert by the archaeologist Ludwig Borchardt in 1912. During the Nazi years, Luftwaffe chief Hermann Goering planned to give it back to Egypt, but Adolf Hitler said the bust would have pride of place in a museum for Germania, the expanded Berlin that was due to be the capital of his Thousand Year Reich. Nefertiti means "beautiful woman has arrived". *************************************************************************** Hmmm, can anyone explain to me why it would be necessary to create a bust out of rock covered with plaster and sculpt it to perfection just in order to test out a recipe for Egyptian pigments? Why not make it out of clay coated with plaster? Why add the crown? Indeed, why make a test model after the queen at all? Could not the pigments have been tested on a palette made out of plaster-covered stone? Did Borchardt's wife, after whom it is alleged the bust modelled, really look so much like Nefertiti? We know what Nefertiti looked like from carvings and paintings on monuments that survived the purge after Akhenaten's death; I'm no expert but to my untrained eye the bust generally resembles those representations of Nefertiti, albeit rather idealized. We don't know what Borchardt's wife looked like - no photo accompanied the article so a reader cannot do a comparison. Her name isn't given in the article, so she cannot be easily tracked down, even supposing a photograph of Mrs. Borchardt exists from the time in question. For more information about Queen Nefertiti, see Judith Weingarten's blog.
Posted by Jan at 8:16 AM