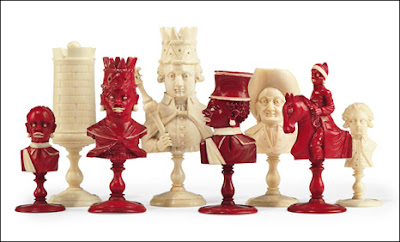 Story from the BBC Online £5k hope for 'rubbish' chess set Friday, 8 May 2009 A chess set thrown out as rubbish by one of north Wales's biggest landowners could fetch £5,000 for relatives of the butler who saved it from the bonfire. The French carved ivory figures which once belonged to Lord Mostyn are due to be auctioned by Christie's in London. They are being sold by the great grandchildren of James Baxter, who served the third Baron Mostyn at Mostyn Hall, Flintshire, in the late 1800s. The auction house said chess sets from the era are "rarely" found complete. Through Mostyn Estates Ltd, the Mostyn family own large areas of Llandudno, Conwy, and their connection with the resort and its development dates back 500 years. The chess set, made in Dieppe in the late 18th to early 19th Century, is estimated to fetch between £3,000 to £5,000 when it is auctioned on Tuesday. According to Christie's, James Baxter was the butler at Mostyn Hall around the 1880s-1890s. During his time at Mostyn Hall, Lord Mostyn gave his butler a cardboard box and asked him to dispose of the contents. On closer examination he discovered amongst the debris that the box contained a chess set and being particularly taken with the game, asked his employer if he might keep it. Lord Mostyn agreed and so began the succession of this distinctive game set to its current owner James Baxter's great grandson, Christopher Baxter Jones, who is selling the heirloom with his brother Nicholas and sister Ann. The auction house said the "intricately carved" chess set was modelled to represent the French versus the Moors, showing "incredible attention to detail". The kings are depicted carrying sceptres, the bishops in wide brimmed hats, the knights as cavalry men, and the rooks as turrets. Sets carved to depict the battles between the French and their colonial possessions became a popular theme among the Dieppe carvers during the late 18th Century and 19th Century as the ivory carving industry thrived. A spokesman for Christie's said: "Chess sets from this period are rarely complete, and most surviving examples date from circa 1820, making it no wonder that this striking chess set caught the curious eye of James Baxter some 60 years later. "A curious eye which allows us to indulge in today what might have been lost forever."
**************************************
Whoa! According to Christie's website, the set ultimately sold for £10,625 on May 12, 2009, Lot 146, Sale 5923.
Posted by Jan at 9:30 PM