New York: Wearing Ourselves Out! 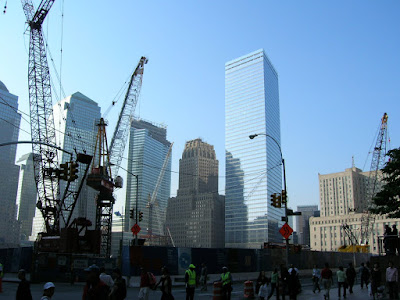 Friday morning dawned sunny and warm, but not too warm. It was a beautiful day and Michelle and Isis were eager to do a boat tour of the Statue of Liberty and Ellis Island. We had a late start, just one of those things. We walked down to Fifth Avenue and 55th Street and were eventually successful in getting on the correct bus, going in the correct direction, to get to Battery Park. (Photo by dondelion: the 911 construction site. The place is buzzing with activity. I got to the end of the small plaza across the road from the construction site and I just could not go any further. I started crying. The drawings for the future buildings are beautiful. I am glad to see the space will soon be re-dedicated to the pursuit of the American way.) 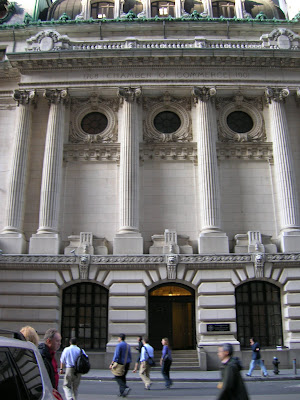 There was lots to see along the long, winding route of the M1 bus that runs from the "top" of Fifth Avenue to the very bottom of Manhattan. We passed through Chelsea, Chinatown, Soho, Tribeca and other neighborhoods. Always there were crowds of people and never-ending store fronts filled with stores and goods not found anywhere else. So unique! Eventually we arrived at the turn-around for the bus. We got off and headed toward what we thought was the correct spot (the Manhattan Ferry Terminal); that wasn't right, but we got directions and ended up at the correct pier in the correct spot, only to learn that we had missed the last boat trip out to the Statue of Liberty for the day - by perhaps 10 minutes. Arggggh! But the day was lovely and Battery Park is beautiful, meticulously maintained. It was filled with people, all having a good time. (This lovely neoclassical building caught my eye in the heart of the financial district as we were walking back from Battery Park. It was the building housed the Chamber of Commerce for awhile at least, built in 1902). Several freelance artists have small booths set up along the winding paths that lead away from the area where the boat passengers disembark. Isis cut a deal with one of them to do a charcoal portrait of Michelle. It took a little while, but less than half an hour, and in the meantime Mr. Don, Isis and I kicked back and relaxed. The portrait was a big success. Michelle looks so beautiful on it. It's hard to realize she's all grown up - it seems like yesterday she was an 8 year old! (Here are Michelle, me and Isis - the three Goddesschess Goddesses, in front of a big deep orange sculpture that looks like a number 1 die). 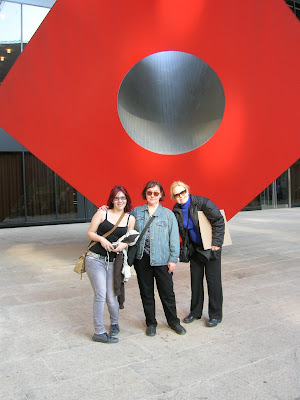 After we left the park area we explored a bit, marveling at the architecture and the mish-mash of buildings that create unending photo vignettes! Friday night saw us dining at Applejack Diner once again, but it was dondelion, Michelle and me; Isis was tired and stayed resting at the hotel. It was a lovely night and we got in a few more photo ops. The above are some photos we took on Friday.
Posted by Jan at 7:07 PM

Hi Jan, nice to see you have created this blog, it is very interesting to read and I will return often to do so. I have my own blog as well,I hope you come by and check out what I have there, I am still trying to do reporting of chess, and women in chess as well as other topics which I find fascinating. Take care Jan,
sincerely,
Wayne

Glad to hear from you, and that you are still blogging. Keep up the good work.