The Filly Beats the Big Boys :) 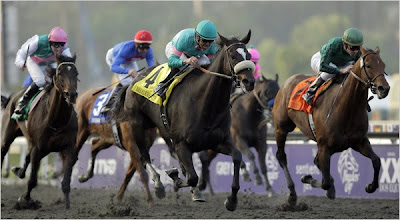 From The New York Times A Classic Ending to Zenyatta’s Perfect Season By JOE DRAPE Published: November 7, 2009 ARCADIA, Calif. — Zenyatta is a headstrong girl, and a big one, too. So when she balked entering the starting gate here Saturday, a gasp rippled through the grandstand. As she was awaiting the start of the Breeders’ Cup Classic, against the best male horses in the world at a distance she had never run, did she suddenly not want to race? (Photo from NYT article: Zenyatta, wearing number 4, looks like she is smiling as she passes by Gio Ponti, wearing number 2.) Mike Smith, her jockey, smooched in, and she stood quiet. But outside, in Post 12, Quality Road was acting up. He bucked and spun, then broke through the gate. Finally he was scratched, and Zenyatta and the 11 other horses were backed out and their riders were asked to dismount. This was no way to start a mile-and-a-quarter race with a $5 million purse, a perfect 13-0 record and the bursting hearts of Zenyatta’s devoted followers on the line. When the gates finally popped open, Zenyatta stood there alone. It would be the last time she would look as if she did not belong with the best turf horses in North America, a couple of monsters from Europe, and the Kentucky Derby and Belmont Stakes champions. In fact, when it mattered most, in the lane, surrounded by a thundering herd, Zenyatta found another gear — no, another engine — and rolled from the rail to the widest path of all. She was large and in charge, and bounded down the Santa Anita Park racetrack as if she were on a trampoline. The Triple Crown winners got left first. Mine That Bird and Summer Bird, see you later. Rip Van Winkle and Twice Over, go back to Europe. The only horse left was Gio Ponti in the middle of the track. He is a salty colt who has won four Grade I races on the turf, and runs like a horse who loves what he does. He was running another big race now, but his jockey, Ramon Dominguez, was working hard with his hands and whip to keep it that way. Smith, on the other hand, was a passenger on Zenyatta. The only thing he was beating back was a smile. “I believe if there was another horse ahead of him,” Smith said of Gio Ponti, “she would have caught him, too. She still had run left.” The crowd of 58,000 was on its feet, and its full-throated roar made it clear that it, too, thought Zenyatta could keep going. In the grandstand, Jerry and Ann Moss, her owners, had tears welling, as did her trainer, John Shirreffs. The chart said Zenyatta won by a length and covered the mile and a quarter in 2:00.62. But the tear-streaked faces from the apron to the clubhouse and the sustained ovation said so much more: Zenyatta is a champion, the kind that does not come along very often. Not only was she the first mare to capture North America’s premier race in its 26-year history, but she also did it with an élan not seen by many athletes in any sport. Not even the once and perhaps future queen of thoroughbred racing, Rachel Alexandra, could have made a crowd of the most hard-hearted of horsemen and horseplayers swoon as Zenyatta did Saturday. “She’s a freak, what can I say?” said Christophe Clement, the trainer of Gio Ponti. “My horse ran a great race, but he couldn’t beat her.” No, Gio Ponti could not beat Zenyatta, and now the sport will be left to wonder if Rachel Alexandra could have held off Zenyatta. She is good one, Rachel Alexandra, a 3-year-old filly who skipped the Classic, and has won eight races this year and beaten the boys three times. In the Preakness and the Haskell, she beat colts her own age, and in the Woodward Stakes she dispatched some of America’s best older horses. But Smith, Zenyatta’s rider, suggested that Rachel Alexandra had never faced a field like this one, and he highlighted the arguments that will rage over the next several weeks as voters decide who is the horse of the year. “I wish they would have brought her,” Smith said of Rachel Alexandra, “so we could prove what Zenyatta is really about. I think she proved it today, and like I said there was more run left there. I’ve never gotten to the bottom of her. I would have given anything to run against her.” Jerry Moss cast his vote for horse of the year with a gulp and a crack in his voice. “She’s our horse of the year,” he said. “We like to play in the biggest spots, and you can’t get any bigger than this.” Neither he nor his wife has any desire to pit Zenyatta against Rachel Alexandra in a match race. “I believe that this is probably Zenyatta’s last race,” Moss said. “I think she deserves to go out with her record intact.” She has left the gate 14 times and ended up in the winner’s circle every time. In fact, Smith insisted that he could get on Zenyatta’s back for another 14 or 1,400 starts and the result would always be the same. He says that Zenyatta was made so perfectly she would never be beaten. “She’s sent from God,” he said. “It’s his filly. I think he wanted a horse and brought her down here to race against everyone.” Jan to Mr. Smith: God isn't a "He." Heeeeeee haaaaaa!
Posted by Jan at 6:41 PM