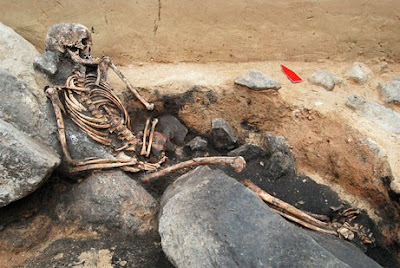 I don't recall that I covered this story earlier, so here it is just in case. From The National Geographic November 4, 2009--This "extraordinary" skeleton of a woman buried in a seated position was discovered during an archaeological survey before the planned construction of a high-speed train track in central Germany, scientists said in a statement.The woman, who lived in the early Bronze Age (roughly 2200 to 1600 B.C.), was found near the town of Bad Lauchstadt and is one of several burials found so far during the dig, which runs from September 2008 to June 2010. "From an archaeological point of view, the excavation is a great chance to learn about the development of settlement on the Querfurter Platte," a geological plate between the Saale and Unstrut river valleys, according to Ralf Bockmann, a spokesperson for the Saxony-Anhalt Office for Monument Protection and Archaeology in Saale, Germany, via email.For example, according to the statement, "the broad range of traces from ancient cultures and the number and quality of the individual finds show how important this region has been for thousands of years not just as a settlement area, but as a transport route."Bockman added: "The region has fertile soils and has been used for settlement for a very long time. But until now there had been no large-scale excavations in that region." —Photograph courtesy Saxony-Anhalt State Office for Heritage Management and Archaeology I wish we knew more about her.
Posted by Jan at 12:05 PM