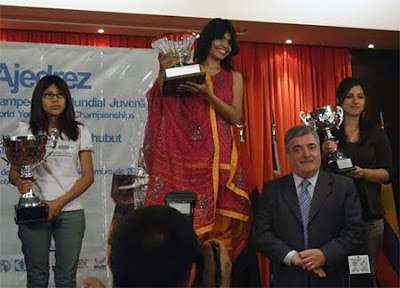 From latestchess.com Maxime, Soumya won World Junior Chess championship 09 Published on 10 November 2009 Soumya Swaminathan scored a much-needed final-round victory to become the girls champion in the World junior chess championship at Puerto Madryn, Argentina. The World junior chess championship was held at Puerto Madryn, Argentina. It was a 13-round Swiss tournament, with a rate of play of 90 minutes for the first forty moves, followed by 30 minutes for the rest of the game, with an addition of 30 seconds per move starting from move one. [Photo of the World Junior Girls winners, from left to right: Deysi Cori Tello (Peru), Swaminathan Soumya (India) and Betul Cemre Yildiz (Turkey)]. “This is a big achievement. With this title, she will directly qualify for the Junior World Cup in Russia later this month. Almost every junior champion has performed well in the World Chess Championship. That is why this title is more prestigious. Soumya has been training with Kunte’s Academy for the past three years. She has sacrificed a lot for chess. She is a hard-worker, a talented player and has a bright future” said GM Abhijeet Kunte. In the thirteenth and final round, Soumya defeated Kubra Ozturk of Turkey for a place in world history. She became the third Indian girl after Koneru Humpy (2002) and Dronavalli Harika (2008) to win the World Junior Girls championship. The World Junior title had been won by V Anand (1987), P Harikrishna (2004) and Abhijeet Gupta (2008) also. India has retained the girl’s title. The World Junior title gives Soumya a direct entry to the Women's World Chess Championship. Financial support from the Government? Betul went into the final round with all set to take Gold. But she tied for first place and stood third on tiebreak points. Had she won clear first she would have got a WGM title directly and been eligible for a special jackpot prize of the Turkish Chess Federation US $33,000! After winning the Junior national title, Soumya applied for the government grant of Rs. 5,00,000 (around US $10,000) through All India Chess Federation (AICF), even after filling up all the necessary documents, her application has not been processed as yet. Indian Oil pays Soumya Rs. 5000 (around US $100) per month as a scholarship, while Persistent Systems has provided the laptop. Reference:-- Official website
Posted by Jan at 7:42 PM