Most Ancient Civilization Started in Bulgaria? 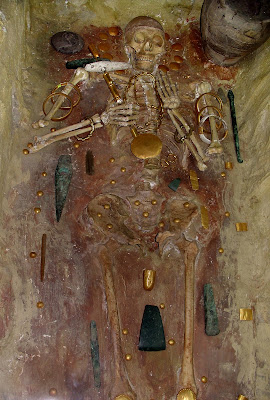 We'll see if more is published on this in the future. I am open to the idea of older civilizations than those in the "Fertile Crescent" (which sort of includes ancient Egypt). Not all of our current assumptions about how everything developed and when it developed are necessarily correct, as we are finding out daily! However, for now, I'm taking this "assertion" (it's not really a report) with a grain of salt. What I do know is that the Varna, Vinca and other cultures in Bulgaria demonstrated a great skill with metallurgy at a very early age. Photo: Varna burial, c. 4600 BCE. Standart News November 3, 2009 Krastina Marinova Most Ancient Civilization Was in Bulgaria An ancient civilization, older than the Egyptian, existed in the lands of the coastal city of Varna, reveals the most recent scientific research of a team of archaeologists in Germany. Vladimir Slavchev from Varna Archaeological museum is part of that team. According to this large-scale study, the most ancient civilization in the world lived in the lands between Mangalia to the north and the Kamchiya River valley to the south. All the following societies imitated the local way of life. The old society from the region near Varna set the beginning to all kingdoms, scientists maintain. The burials of noble men and luxury objects unearthed in the famous Necropolis support that opinion. Over 200 valuable objects, among which are 2,000 golden beads, part of Varna's oldest treasure will be displayed in an exhibition in New York. Where and when will this exhibition be in New York??? More about Varna: Wikipedia
Posted by Jan at 12:20 PM