Here's a New Take on Elephants in Ancient Egypt!

I am familiar with art from Rekhmire's tomb but I sure don't recall anything about an pygmy elephant or - what? - a surviving pygmy mastodon in the Bronze Age?

The depiction itself is fascinating, the article is interesting and the discussion is very on point - and hardly an assinine or rude comment in the lot!  That's amazing in and of itself, but perhaps I've just been reading the comments sections at CNN.com and Yahoonews.com too long.

Elephants are of particular interest to me and I did quite a bit of research back in the early to mid-2000's on the subject of elephants in the Middle East.  The comments about a small surviving herd of elephants in Syria are right on, and they were most likely hunted to extinction in the 10th century BCE.  How sad. 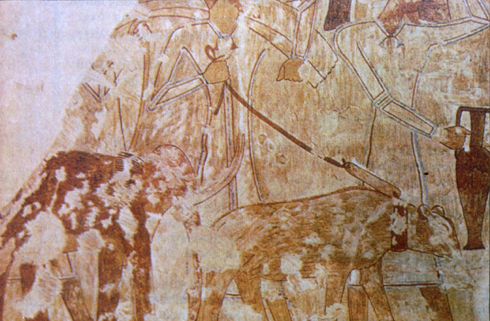 Anyway - here is a graphic of the "small hairy elephant" in question and a link to the article by Darren Nash and comments.  The elephant is the figure on the left, the bear [suggested by Darren Naish, or lioness, suggested by readers] on the right - with the collar on and leash!  My comments: it's definitely hair or fur on the elephant figure.  The Egyptians were familiar with elephants and would mark their sking with cross-hatching to denote the tough, creased hides.

To get the timelines correct, Rekhmire was a Vizier of Egypt for two Pharaohs, Tuthmose III and Amenhotep II (c. 1479 to 1401 BCE) during the XVIII dynasty, so the dwarf mastodon(?) in question would have been alive and presented at the Egyptian Court during Rekhmire's lifetime.

Did the ancient Egyptians know of pygmy mammoths? Well, there is that tomb painting.
Category: mammalogy
Posted on: January 19, 2011 8:52 AM, by Darren Naish