Meet Us In St. Louis

I took an interesting walk around the immediate area of the Chase Park Plaza yesterday afternoon while I was waiting for 'Sis to arrive at the hotel.  It is a a bastion of the original wealth in the city from a century ago.  Gated private roads, gigantic mansions, each one trying to outdo its neighbors in appointments and ostentation, lots of high walls blocking off private areas, and really big old trees -- all suffering from drought.  It appears that St. Louis has suffered through much the same weather that Milwaukee has this summer.  I see in this morning's edition of USA today that the entire country suffered through the second hottest summer on record.

Those houses were mostly built in a time when the wealthy had "staff" to tend to all of their needs - and those gigantic houses.  In a city where the sales tax is 10.99%, I shudder to think what the real estate taxes are on those relics of a glorious past!   I wonder if any of them still have live-in "help" today.  It did not look as if too many of them have been chopped up into flats, so one can only speculate as to the people who are living in those mansions these days...

The forecast for the weekend was rain, but last night it was a beautiful evening.  The sunset was gorgeous - should have thought to get a photo!  You can tell I'm not a camera person!  Later the moon was peaking through the clouds and it was a balmy evening.  Sis opened up the windows in our suite and we enjoyed the fresh air as we ate supper -- goodies garnered from a trip through Straub's, a market a block away from the hotel, that has the most unique mix of merchandise I've ever seen packed into a relatively small space!  Excellent tuna salad on croissant sandwiches, by the way!  We also split an equally excellent Greek salad and stocked up on snacks and drinks.  I'm not paying $3 for a courtesy bar can of Coke the hotel offers in the room - and that doesn't include a 20% surcharge or the 10.99% sales tax!  People in Wisconsin scream abouthow "high" our taxes are and the sales tax here is 10.99%  Holy fricking Cow!

We stopped at Straubs on the way back to the hotel after the dedication ceremony at the Chess Hall of Fame/Museum.  We settled in and turned on the Packers game and had a mini-feast while we cheered on our favorite players and discussed some of the calls made by the refs.  We were both tired after a long day of travelling and I think it was lights out - at least for me - before midnight.

Today the rain has come.  It is pretty grey outside right now, but the rain has stopped for the time-being.  I was up with the sun but 'Sis runs on an entire different schedule than I do; she's used to sleeping during the hot days in Las Vegas and getting active at night into the wee hours of the morning.  I'm just the opposite.  So it's nearly 9 and we should be out and about doing things, making an appointment at the spa, etc., but I have no idea when we may actually get out of here.  Maybe not until tonight.  Think I'm going to head out myself shortly, I can't stand the thought of wasting the day in this suite pecking away on this mini Acer!

Our outfits from last night: 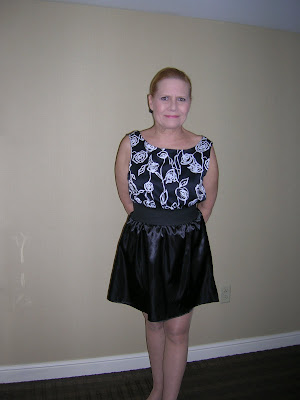 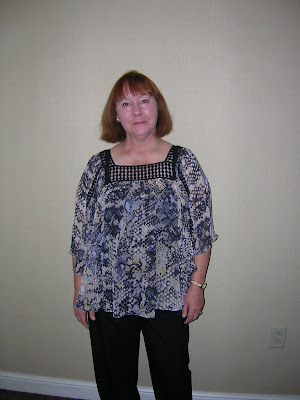 We need Michelle here to take better photos of us!  I love my top, but it makes me look even larger than I am.  I have actually lost weight - honest! Sis maintains her "dancer's" body.  I think we look rather like Jeff and Mutt together...