So, there 'Sis and I were, nattering away with the clerks at Bissiger's and there is Lynn, who asked if we were in St. Louis for the chess doings and we said yes, and the rest, as they say, is herstory! 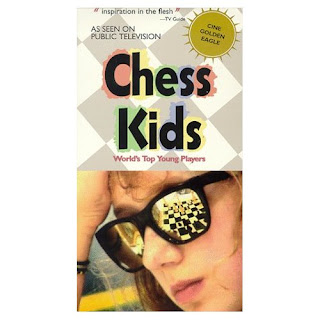 Lynn produced programming related to or involving children for many years when she was inspired by an article she read about a then very-young Judit Polgar, who at the time was the youngest person ever to earn a GM title.  The ultimate result of what grew into a project was her award-winning video, Chess Kids.

Lynn recently did follow-up interviews with many of the now grown-up protaganists of her original video, some of the most brilliant chessplayers then (and now), in the world, which have been added as a post-script to the original video.

To say Lynn, 'Sis and I had an engrossing and wide-ranging conversation would be an understatement :)

Chess Kids and its post-script will be screened at the Harwood Museum of Art in Taos, New Mexico, on September 17, 2011, introduced by Lynn herself.  Read more.

Lynn is giving a presentation on Chess Kids and its update at the Chess Collectors International meeting here in St. Louis on Saturday 9/10 at 3:00 p.m.  We have found a new friend whose interests overlap so beautifully with our own, and we will stay in touch!  Lynn, thanks for Chess Kids and thanks to the Goddess Serendipity that led to our meeting!
Posted by Jan at 9:22 PM