Is Berlin Museum's Hatshepsut a Forgery? 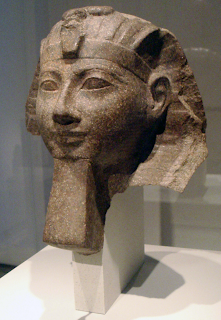 (Image from Wikipedia Commons, identified as: bust of the pharoah Hatshepsut, taken at the Altes Museum, Berlin (part of the Ägyptisches Museum Berlin collection), taken by Keith Schengili-Roberts in 2006. I think this is the bust referred to in the article, but I wouldn't swear to it on a stack of bibles). Egyptian bust in Berlin museum may be fake July 19 2009 at 04:35PM Berlin - An Egyptian bust acquired at vast expense by a Berlin museum more than two decades ago may be a forgery. The bust in brown granite of female Pharaoh Hatshepsut, who ruled Egypt for 22 years, is one of the draws at the German capital's Egyptian Museum and is only outshone by the limestone bust of exquisite Queen Nefertiti. Scientists at the Technical University of Berlin have discovered the Hatshepsut stone is rich in the minerals magnesite and siderite. No other bust from the Nile region is made of such rock, suggesting that the 16.5cm figure might be a modern fake. Asked for comment, Dieter Wildung, the recently retired director of the museum, said he had not been aware of the scientific study. The museum reportedly paid 1 million marks (R5.9 million) to buy the statue in 1986 from Robin Symes of Britain but Wildung declined to confirm its price."The purchase was long before my time," said Wildung, who became head of the museum in 1989 and retired two weeks ago. He criticised the media for "sneakily" going public with the report without clearance from the museum. Hatshepsut died in 1458 BC.
**************************************************************
Why did they have the piece tested? Did someone on staff suspect it was a forgery? Surprisingly, this time I actually found answers to my questions! Check this post out from Google Groups, by Tom Flynn on July 21, 2009: University denies test on Egyptian bust in Berlin Posted : Mon, 20 Jul 2009 16:23:40 GMT Author : DPA Earth Times: Berlin - A German university denied Monday that it had analysed the bust of Pharaoh Hatshepsut, an Egyptian sculpture at a Berlin museum, or suggested the statue was a forgery. The bust of the female ruler is one of the icons of the Egyptian Museum in the city. It was acquired for 1 million marks (510,000 euros or about 715,000 dollars) two decades ago. A news report Sunday said a test of the stone suggested it might be a fake. But the Technical University of Berlin said it had never studied the bust's authenticity. Scientists had in December 2007 merely studied some tiny flakes of stone found on the statue. "The analysis found these flakes were made of rock rich in the minerals magnesite and siderite. Where these flakes came from has not been established," a statement by the university said. The German news magazine Der Spiegel had asserted such rock was not sculpted in any other known Pharaonic statue and that this implied the figure was fake. Hatshepsut ruled Egypt for 22 years till her death in 1458 BC. Her 16.5-centimetre-high brown granite bust is a key draw at the museum, along with a limestone bust of exquisite Queen Nefertiti. The Berlin museum has been criticized by Cairo officials for refusing to give Nefertiti's bust, regarded as a national treasure, back to Egypt. Link: http://tinyurl.com/n6xxaz
Posted by Jan at 12:41 PM