A Muslim Mother Seeks Justice for Her Dead Son 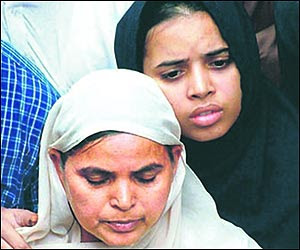 In a murky situation, a mother challenges official police reports surrounding the death of her son. (Photo: Ishrat Jahan's mother and sister) Setback to Modi as Guj HC decides to set up an SIT to probe Ishrat's encounter Submitted by admin3 on 8 August 2009 - 11:36pm. By TwoCircles.net Staff Correspondent Ahmedabad: In another severe setback to the Narendra Modi government, the Gujarat High Court has decided to set a up a team of three high ranking police officials on the lines of the Supreme Court-appointed Special Investigation Team (SIT) to probe the truth behind the encounter of Ishrat Jahan and three others on the outkskirts of the city on June 15, 2004. This was announced by Justice KS Zhaveri on Friday on a petition filed by Ishrat’s mother Shamima Kausar. Justice Zhaveri directed the state government to submit a list of all the officials of the rank of additional director general of police (ADG) by August 12 so as to take a decision on the names of those to be included in the team. In her petition filed through advocate Mukul Sinha in October 2004, Shamima had demanded CBI probe. However, the court rejected the demand to hand over the case to CBI saying that it was not possible for CBI to conduct all investigations. However, it decided for a probe by a team of police officials of the level of ADG. In her submissions, Shamima said that investigations by the Department of Crime Branch (DCB) of Ahmedabad police was not fair. DCB official Parikshita Gurjar, who had conducted the probe after the encounter, had concluded that it was a genuine encounter and filed a summary in the POTA court, requesting for closure of the case. But Shamima, in her petition, disputed the findings of Gurjar and said that Gurjar’s findings intended to support the theory of the police officials involved in ‘fake’ encounter. Police officias, like in other encounter cases after 2002 anti-Muslim riots in the state, had floated the theory that the four were on a mission to kill Chief Minister Narendra Modi. The police, in its FIR lodged in DCB police station, had alleged that Ishrat Jahan, her husband Javed Pillai alias Gopinathan Pillai (who converted to Islam to marry Ishrat) and two Pakistanis – Akbar Ali Rana and Zeeshan Jouhar Abdul Ghani – were Lashkar-e-Toiba operatives. But Shamima disputed it, saying it was a fabricated case by the Gujarat police and her daughter was not linked to any terrorist organization. She demanded a fair probe, saying she did not believe Gujarat police version. The police FIR itself raises doubts about the claims of the police. According to FIR (a copy of it is in possession of TwoCircles.net), an intelligence was received by Ahmedabad city police about Pakistan-sponsored terrorists planning to attack Modi in Gandhinagar around mid-June in 2004. According to intelligence received, terrorists were to start from Mumbai by road and then drive straightaway to Gandhinagar. But if it is true that police had received the intelligence, then why did it wait to intercept them in Ahmedabad? Why it did not make a bid to intercept them at the entry point in Gujarat or on the way at Surat, Ankleshwar, Bharuch or Vadodara because there was a possibility of the terrorists of having changed the route at the last moment and this would have defeated the Ahmedabad police plan to encounter them. In fact, this question was raised by Justice Zhaveri himself while asking for the list of the ADGs. Another point that strengthens Shamima’s suspicion that it was a staged encounter is the police claim in the FIR that one of the terrorists got down from the car and took position with an AK-47 assault rifle. But, surprisingly, none of the police team received even a scratch while all the four terrorists got killed in retaliatory fire by police, a standard version used by police in all fake encounters. Yet another point that raises suspicion about police version is that police have not so far found the owner of the car (MH02-JA-4786) in which the four alleged `terrorists’ travelled from Mumbai to Ahmedabad. In the same way it failed to trace the ownership of the motorcycle that was allegedly used by Sohrabuddin, also gunned down in an encounter in Ahmedabad by the same police officials, including D G Vanzara and Dr. Narendra Amin. Both Vanzara and Amin are currently imprisoned in connection with Sohrabuddin’s encounter and facing trial. Cf. coverage at Indian Express.
Posted by Jan at 5:58 PM