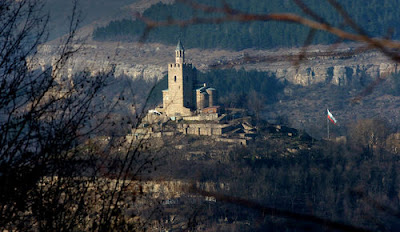 Article from the sofiaecho.com Archeology works in Veliko Turnovo discover a princess Mon, Aug 03 2009 11:27 CET by Nick Iliev (Photo by Nadezhda Chipeva, showing the escarpments of Tsarevets, the seat of medieval Bulgarian monarch) The tomb of a Bulgarian princess was discovered in the northern Bulgarian town of Veliko Turnovo, Bulgaria's medieval capital, the Bulgarian National Radio (BNR) said. Archaeologists Nikolai Ovcharov and Hitko Vachev have excavated on August 2 what has been described as the grave of a Bulgarian princess, buried in the courtyard of the St St Peter and Pavel church in Veliko Tarnovo. According to the two archaeologists, they have concluded that the grave dates back to the 14th century or earlier, sometime after the reign of tsar Ivan Assen II. The princess was found wearing "luxurious clothes trimmed with golden ribbon; excellently crafted jewelry; a golden ring, earrings, silver and golden pins were also found around the buried body", the BNR said. Archaeologists have discovered over 100 artifacts since excavation work commenced two months ago at the St St Peter and Pavel as well as St Ivan Rilski churches in Veliko Turnovo. Most of discovered finds consist of golden jewelry. Once the items are restored, they will exhibited at the town's history museum in autumn 2009.
************************************************************************
Not discussed in the article - why these churchyards are being excavated. Are the churches being renovated? Torn down? Or is something else going on here? This report makes me uneasy. Where does the line end between legitimate archaeological excavations of tombs and crass grave-robbing for treasure trove?
Posted by Jan at 7:58 PM