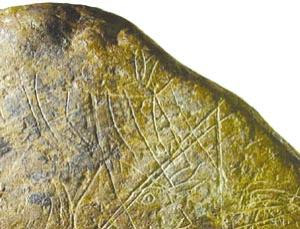 From Newscientist.com Found: A pocket guide to prehistoric Spain 05 August 2009 by Charles Choi and Catherine Brahic Magazine issue 2720. MODERN humans have got it easy. Anyone with a computer can look up just about any location and within seconds bring up a map complete with step-by-step directions from A to B. The internet and centuries of map-making mean getting to, say, the prehistoric painted caves of France and Spain is child's play. "But imagine a group of hunter-gatherers, returning to an area they had not been to for a long time. How do you find a particular cave, especially if the vegetation has changed and its entrance may be masked?" asks independent archaeologist Paul Bahn. The answer may be that hunter-gatherers had their own maps. A team of archaeologists have matched etchings made 14,000 years ago on a polished chunk of sandstone in northern Spain to the landscape in which it was found. They claim to have the earliest known map of a region in western Europe - a prehistoric hunting map. The rock, roughly hand-sized and 14,000 years old, bears a mess of overlapping etchings. It was found in a cave in Navarre on the southern side of the Pyrenees and it took Pilar Utrilla of the University of Zaragoza, Spain, and colleagues the better part of 10 years to disentangle the lines and make sense of them (Journal of Human Evolution, DOI: 10.1016/j.jhevol.2009.05.005). Rest of article. Examples of old maps from the article: The oldest map found in Europe, discovered in Pavlov in the Czech Republic, is about 25,000 years old. It depicts a mountain, river, valleys and routes around the region. A schematic 6200-year-old drawing of Çatalhöyük in Turkey may be the oldest known city map. The oldest known map of the world dates to 600 BC. It is inscribed on a clay tablet discovered in the city of Sippar in southern Iraq, is centred around Babylon and shows the world as a circle surrounded by "bitter water": the salty sea. The oldest complete star atlas, measuring 2 metres across, was discovered in China in 1907. It dates from the 7th century AD and marks the position of 1339 stars, including clearly recognisable groups such as Orion and the big dipper.
Posted by Jan at 10:31 PM