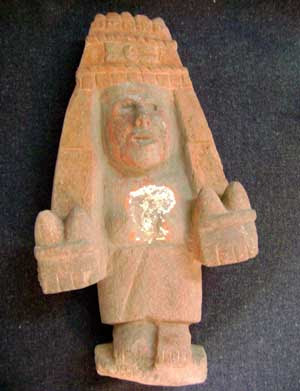 ArtDaily.org carried the story. Here is the press release from the Institudo Nacional de Antropologia e Historia (English pages) (photo from press release). Late Post Classic Maize Goddess Sculpture Restored August 4, 2009 Chicomecoatl monolith found recently in Zempoala municipality, Hidalgo, 500 years old, which represents the goddess of maize, was restored by National Institute of Anthropology and History specialists and now historical research has begun. The archaeological finding associated to Mexica culture dated between 1430 and 1520 was found in July 2009 by employees of a private company, notifying immediately the Hidalgo INAH Center, which proceeded to remove and guard it. The 60 centimeters tall sculpture represents the Mexica maize goddess, Chicomecoatl, linked to fertility. She carries 2 corncobs on each hand, and has an orifice in the chest, where a greenstone or “chalchiutlicue”, which represents the flower of life, was inlaid. Archaeologist Osvaldo Sterpone, in charge of moving the piece to Pachuca and who will coordinate historical research, mentioned that the orifice was covered with red colored lime that matched the stone that has to be identified yet. He remarked the stone sculpture was found near Santa Ana Archaeological Site. Sterpone commented that the sculpture may be dated in Late Post Classic period, when Mexica Empire controlled this region to obtain obsidian and other material that they traded. Restoration of Chicomecoatl, which presents an excellent conservation state, was in charge of Virginia Carrasquel, from Hidalgo INAH Center, who leaded cleaning, stabilization and preservation tasks before being exposed at Zempolala Community Museum for 2 days. After it returned to Hidalgo INAH Center, the piece was guarded at the cultural goods warehouse, where Chicomecoatl will be studied to determine the influence it had in the region. Regarding the context of the finding, archaeologist Sterpone mentioned that no other element associated to the sculpture was found in the sand mine located at San Pedro Tlaquilpan. “There are not regional archaeological studies about Chicomecoatl, so we will base on historical sources. In this sense, a similar sculpture was found during the 1970´s decade in Autonomous University of the State of Hidalgo” concluded the archaeologist.
Posted by Jan at 7:36 PM

...chicomecoatl(N)=7snake, goddess
of feast and famine, you see her
as the empress and the star
in tarot. she is the 7th day of the
7th trecena/harveststorm=quiahuitl,
the nauatl word that gives us:
ahuitl(N)=au(n)t, a(r)ui(s)t(letra)=(h)a(r)ve(s)t, and, a(r)i(s)to(gk). the 7 greek seasons of orchard culture when, opora(gk),
opportune, was the harvest month known for its stormy weather which
rained drops onto the ground for
the gatherers, a pre-agricultural
harves. my favorite pickture of
7snake is in the codigo vindnobonensis where she is depicted as snake with goddess head
and in each fold of her coils is
an elote/ear of corn, her name
in greek=oilos(gk), the old name of ceres, from, oya oox(N)=degrain,
oilia(N/reverential of oya oox).
when you go into the tonalamatl
with the 9 gods/goddesses of the
night to her day: 6x13=78&7=85,
divided by 9=81&4=the 4th god,
cinteotl, the bachelor corngod,
tzintli(N)=saintly, the honorific.
the number 7 is followed all the
way back to the 7th day of souls,
which =mazatl(N)=deer, our first
sustenance/tonacatechuhtli(N)=
to-naca/our flesh -tecuhtli/deity,
as in deer/deor/ d/teot/l/r=teotl.

You wrote: "her name
in greek=oilos(gk), the old name of ceres, from, oya oox(N)=degrain,
oilia(N/reverential of oya oox)."

Can you provide some citations to this older name for Ceres? I do not believe I have read that anywhere - ceres = oya oox (degrain, which I understand means to remove grain when it is ripe?)

When I saw this carving with that tower-like crown on her head, I was immediately reminded of the Goddess Cybele. See, for instance, http://books.google.com/books?id=b7KbLLjzuRgC&pg=PA37&lpg=PA37&dq=goddess+with+tower+on+her+head&source=bl&ots=UQ4toXeqph&sig=U17_jz2J3p3YmQXqSVyrm3AzxhE&hl=en&ei=VpJ_SrfOOo7-NdKyid4C&sa=X&oi=book_result&ct=result&resnum=1#v=onepage&q=&f=false. Hope that link works - it's from an excerpt at Google books.

I'm going to post another classical photo of Cybele from c. 203 BCE Pergamum - can't do it in this comment!

...i have cybele as goddess of bees, from tz'ib, mayan day 16 in the tzolkin, meaning, wax, also, c'ibin tztozil, meaning to write, wax tablets being used for that in mayan time. they were bee keepers and still export to europe.
ceres is the new name for the cereal goddess,
she was known in early greek as,
oiloo, which i sourced in
nauatl as the reverential,
oilia ooili(N)=to shuck corn,
from, oya oox(N).
the oilos was the name of the song sung to her(ceres)and became her name. the fact that, oilia(N) is
the reverential in nauatl, means
that it can be used for the name
of a goddess.
altho you rightly place cybele
near ceres/oilos/oiloo, she is the
pre-harvest goddess of pollination, who make harvest possible.

...the tower-like headress of
chicome coatl/7 snake, are ears
of corn, usually 7, but if she
is holding 2 in each hand there may
be just 5 in her headress. i don't
think she's related to cybele because
the corn plant pollinates itself,
no bees necessary. cybele's name
is also related to cipactli, day
one of the tonalamatl, who was also
a member of the quetzalcoatl expedition, 3309bc, his name translates to (s)c(r)ip(ac)t/li
(letra)=script, as he was a scribe.
hope this clears this up for you.

...to anon., google, corn plant
pollination, for the answer.
corn is the bachelor plant, has
separate male and female flowering parts. the only human intervention
corn has suffered are the transgenic varieties which mexican
farmers are trying to keep out of the country as they threaten the
bio-diversity of the species.
an AID program years ago produced a corn plant with short
stalk that bore twice as much as
tall stalk plants, so they tried
it in a rural area where tall corn
was, yes, it yielded double, but
the peasants had animals to feed and the women collected the harvest
on the small plants. the unaccustomed bending and stooping
gave every harvester severe back
pain, wives complained to husbands, and the pipil were back with their tall plants in no time.

...i now believe kubaba and cybele
are related through honey bee the
pollinator, and that both are old
harvest goddesses, versions of ceres, whose older greek name is
from the rev. of oya/oox=oilia(N)=rock the corn from its sock.
kubaba=co pa pa(N)=come paint paint, pa is an old form of the
later noun palli(N), from which,
p/a(r)lly(letra)=barley, yup, the
turkish grain goddess, whose cups
are for measuring not her maiden
forms but her harvest toasts!

Definitely agree that there is a connection between all of the ancient "corn" goddesses via the bee - the great pollinator. Without the bee, the world is in big trouble. The last few years there has been great concern about the death of hundreds of thousands of bee colonies in the USA for precisely the reason that without bees, pollination is much reduced and left to wind and other insects, and humans doing it quite clumsily and slowly! The bees are the most efficient at the job.

Honey is sacred to the goddess for so many reasons - it has antibiotic qualities and thus was used for medicine; it is a great preservative - it was Isis who told me that Napoleon's body was encased in a coffin filled with honey in order to preserve it for the long journey to his burial spot; it is used to make the sacred mead - very important in ancient ceremonies and, of course, celebrations!

Not many people realize how far back the symbolism of the bee reaches in ancient Egypt - pre-dynastic, related to the archaic goddess Neith who was goddess of just about everything! She was a warrior goddess (Athene), inventor of weaving and cloth-making, goddess of the bee (Per-Nit: "Per" = "house"; "Nit" = "bee", sacred sanctuary at Sais in the Delta. The bee was part of the ancient King of the North's titles - that's how important it was considered, associated with Ra's "tear drops."

Through the connection to Ra, there are Ra's various daughters, including the most ancient one, Hathor (Het-Hert). One of the most compelling tales out of ancient Egypt was the "end of the world as we know it" story of a Het-Hert set loose on mankind to destroy them after they had greatly offended Ra, but mankind was spared when Ra relented and saw to it that Het-Hert got drunk on beer (honey-beer?), fell asleep, and forgot all about her mission of rendering death and destruction.

This is the flip side of Het-Hert's identity as a pre-dynastic goddess of fertility, beauty and music. It's classic - the "two-faced" goddess, LOL! One side represents life; the other side represents "death" - but also the promise of resurrection, so there really was no such thing as death in the old belief system.

I wish we still had that belief. Now all we have is a cold, foreign god stuck somewhere up in "heaven" who, in the old days, used to routinely kill off "his people" by various awful methods - fire/brimstone; disease/plague; starvation; drowning in a universal flood, etc. Some god, yech!

...hi, jan,
the 2-face goddess=feast and famine=chicome coatl/7snake,
the 7=deer(culture)=ce-uen(tli)=
one offering, any 2 goddess as
2=ehecatl/wind-weave hecate,
the wind that brings rain, and
usually they are linked to venus,
as mazatl/7/deer was. the goddeses
melt into each other, share attributes like sisters they are.
i have Hathor as, h/th/t/tlalli
toloa(N)=tla(l)toloa(N)=bow to
earth/tlalli tlan land.
her old name, het=h/th/tetl(N)=
stein=stone,-hert=h/th/t/tletl(N)=
fire=t/l/red/t/l=red earth.
the egyptian dynastys came from the east, red hair was prized and
many a pharoah/pharoana had it,
they were deer tribe like all the
east-west-east nomads. the scarab
on which they base their funeral
practices is also the word, caribou, as i may have told you.
Ra, of course,=r/l/t/tlatla(N)=
flame=rha(old name for rhubarb-strewn volga).