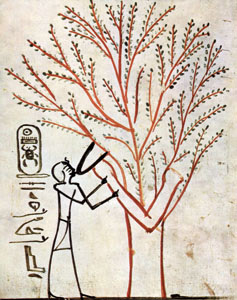 This month BAR is offering the entire contents of its March/April 2008 issue free online.

Herschel Shenks, the editor, isn't afraid of controvery :) I get a chuckle every month reading the "Letters to the Editor" where irate people write in saying they are cancelling their subscriptions because BAR has published some article or other!

Don't let the name of the magazine fool you - it's not a bible-thumping support vehicle.

Check out this article:
A Temple Built for Two
Did Yahweh Share a Throne with His Consort Asherah?
By William G. Dever

The small house shrine published here for the first time provides significant support for the contention that the Israelite God, Yahweh, did indeed have a consort. At least this was true in the minds of many ordinary ancient Israelites, in contrast to the priestly elite.1 In what I call folk religion, or “popular religion,” Yahweh’s consort is best identified as “Asherah,” the old Canaanite mother goddess.2
. . .
Oddly enough, there is no description or even allusion to these naoi, or house shrines, in the Hebrew Bible. That they are model temples is beyond reasonable doubt. They are clearly miniature “houses for the gods,” as witnessed both by their clear architectural form and by the fact that in all West Semitic languages (Canaanite, Phoenician, Punic, Aramaic, Hebrew, etc.) the word ba¯yit/bêt is translated as both “house” and “temple.”

But what deity was worshiped in these house shrines? All of their motifs, fortunately, are reasonably well attested and understood. And nearly all are connected with well-known female deities, particularly Canaanite/Israelite Asherah and Phoenician Tanit (Asherah’s later reflex in the wider Mediterranean world).

The palmette capitals of the tree-like columns are not lotus-blossom capitals, as Weinberg and other classicists once supposed, much less “proto-Aeolic” capitals as William F. Albright thought. The late Israeli archaeologist Yigal Shiloh clearly demonstrated that they are stylized palm trees, especially typical of Iron Age royal and temple architecture.7 More recent research has shown that the symbolism responsible for the adaptation of the tree motif for columns in ancient Israel (and in Aramean and Phoenician monumental architecture) is probably deeply rooted in the old Canaanite identification of Asherah as a tree-goddess.

In an important article in BAR, for example, the late Ruth Hestrin brilliantly established the connection between the symbols of a stylized tree, a pubic triangle and a nurturing goddess. She even found representations in Egyptian art of the goddess with a tree trunk as a torso, a branch offering a breast to a nursing infant (in this case, the Pharaoh’s son).b (Ruth Hestrin, “Understanding Asherah— Exploring Semitic Iconography,” BAR, September/October 1991 - the article is free at BAR this month too.) (Image above: from the burial chamber of Pharaoh Tuthmosis III, the king is suckled by a breast that grows from the tree. The breast is held for the king by the goddess’s arm, also growing from the tree.)

In short, these tree-like columns were thought to be particularly appropriate in model temples dedicated to the tree-goddess Asherah.