An Interview with GM Koneru Humpy 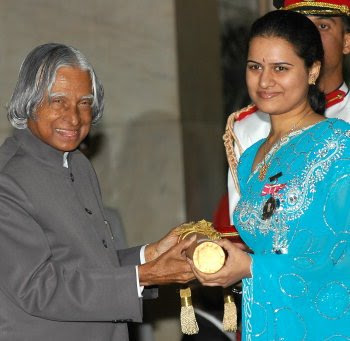 She is such a centered, focused young woman, and I admire her (and her chess accomplishments) tremendously. This is one of my favorite photographs of Koneru, receiving the Padma Shri award from A. P. J. Abdul Kalam, President of India, in 2007. She looks lovely - serene, comfortable and confident.

Here is an interview I missed from December 11, 2007 at Latest Chess (there are many photographs too):

Grandmaster Koneru Humpy holds the record for the youngest woman ever to become a Grandmaster, she achieved the GM title when she was 15 years, beating Judit Polgar's previous record by 3 months! She crossed 2600 ELO rating in October 2007 FIDE rating list, presently she is at number two in the world for women (behind Judit Polgar), breaking the record of 2577 set by Susan Polgar for the second highest ranked female player in Chess history.

In this interview with Konery Humpy, she tells us about her recent performances, her views on Indian women's Olympiad chess team, women-only chess events, importance of physical fitness. She also talks about the importance of encouragement and support from family, role of parents. She considers Hou Youifan of China as the best upcoming player who can possibly match with Judith Polgar...We hope our readers would enjoy reading the interview with interesting snaps and famous games of Grandmaster Koneru Humpy.

LatestChess:- Hello Humpy, We are glad to have you on LatestChess. Congratulations for crossing 2600+ ELO rating, you performed very well in European Team Championships and Asian indoor games as well. You must be very happy with your performances.
Koneru Humpy:- Thank you, I'm happy with my performance in European Club Cup. I scored 5.5 out of 6 games with a performance rating of 2800. However, I had mixed results in Asian Indoor Games. I知 not satisfied with my performance in rapid & classical. But, winning against Zhu Chen in the finals and taking Gold Medal in Blitz is satisfactory.

LatestChess:- According to a study done in London, women chess players play worse against their male counterparts. The survey suggests that Women feel inferior when they play chess against men. We are sure you wont agree with this survey, what are your views on this?
Koneru Humpy:- As you said, I definitely won't agree with this survey. Number of players in women's section is insignificant when compared to men. This number should increase, so that there will be more competition that will enable to strengthen women's chess. As you can observe, now there are more women players with rating around 2500. Earlier we barely had one or two players at that rating level. I'm sure, we can find more women players at 2600 level in future.

LatestChess:- Do you think our culture will be able to make it more conducive for girls to stay in chess as they get older? What's needed to accomplish this?
Koneru Humpy:- In my opinion chess game is more advantageous than outdoor games for girls. Excessive physical fitness is not required in chess as in case of other games. So, girls will be more comfortable to play irrespective of their age. Encouragement and support from family is necessary to continue their career.

LatestChess:- Judit Polgar is famously known for avoiding women-only chess tournaments. Have you ever thought of doing likewise?
Koneru Humpy:- My concentration will be more on men's events. However, I'll continue to play selectively in some official events in the Women's section. Probably Women world Championship will be my next tourney in women's arena.

LatestChess:- What are your views on women-only chess events? Are they useful for encouraging more women to participate?
Koneru Humpy:- Now-a-days, women's events are also gaining popularity. In the recent times, more invitation tournaments like North Urals Cup are being organized in the women's section. Women-only events help a lot. They will encourage more young girls to play chess.

LatestChess:- In India, Many young chess players are ready to take a break in the education and they are fully focused on chess preparations. What are your views?
Koneru Humpy:- I don't think that taking up chess as a career and completely neglecting studies will be necessary at earlier stage. After getting certain level in the game, they themselves should decide their preferences i.e. whether to play seriously or not.

LatestChess:- What big DO or DON'T advice would you offer parents of enthusiastic and talented chess children?
Koneru Humpy:- Parents shouldn't compel children to play chess. If children are genuinely interested in the game, they should encourage them. But, they shouldn't hurry to get results.

LatestChess:- How often do you exercise? Do you think daily physical exercise can help a chess player to cope with pressure and increase brain's ability to concentrate?
Koneru Humpy:- I spend around one hour per day on physical exercise. Exercise is a must for every chess player. As the proverb says, "a sound mind in a sound body", exercise shows a lot of impact on brain.

LatestChess:- Who do you consider the best up coming young female players in the world, aside from yourself? Do you think, any of the current young crop can match with Judith Polgar?
Koneru Humpy:- I consider Hou Youifan of China as the best upcoming player. She is performing outstandingly for her age. If she improves further and shows stability, she can possibly match with Judith Polgar.

LatestChess:- Could you tell us a few words about you most important career achievements?
Koneru Humpy:- Winning World Junior in 2001 at the age of fourteen and becoming Grandmaster in 2002 at the age of fifteen are important achievements. I consider winning two International Open tournaments in Europe as my best performance so far.

LatestChess:- Where do you see yourself in next one year? What are your expectations?
Koneru Humpy:- My next target is to win Women world Championship. As far as rating is concerned I want to cross 2650.
Posted by Jan at 6:26 PM

All the best...Humpy. Hope God showers divine grace on you...