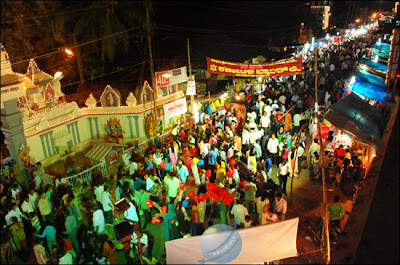 I believe I once read that India is the land of a thousand goddesses - and it certainly seems so. Mariyamma is a goddess whom I had not heard of before. The temple is very brightly decorated with lights and the street around the temple is crowded with people celebrating this feast. I wonder - is the temple always so brightly lit up at night?

The annual feast of Shri Mariyamma Temple located at Urva was held on Tuesday, February 19. This temple is regarded to be one of the oldest temples situated in Mangalore. Thousands of devotees residing in and around Mangalore paid their respects and offered their prayers in the temple. Goddess Mariyamma, also referred to as the goddess of wealth is largely worshipped here.

Meanwhile, Gopalkrishna Suvarna, managing trustee of the temple, announced that the managing committee has decided to establish a golden 'Kalasha,' which would include 400 sovereigns of gold. “The faithful have already started to donate gold and cash for this purpose,” he informed.

HI!
I just had a few comments which you might find useful.

Mariyamman is actually not the goddess of wealth.. that goddess is Laxmi Devi.

Mariyamman is an avatar of Shakthi, and is closely related to Mother Kaali/Durga. Like Kaali, she is generally the guardian goddess of a community. Like Kaali, her shrines have always been approachable to all people regardless of caste. So she is called "MantaiAmman": "Lady of Common Ground".

She is a distinctly South Indian goddess, and like Kaali/Durga she is considered an Earth Mother Divinity. Also like Kaali, she both causes and cures the pustulent fevers that become problematic in the summertime. And like Kali/Durga, she used to be the recipient of an annual buffolo sacrifice.

Her priests ususally come from the "lower", tribal and laboring classes. Also, she is quite favorably disposed towards gay and transgendered people. Furthermore, women play a strikingly more active and central part in her rituals than they do in other Hindu ceremonial circumstances.

As Shakthi, she is the cosmic serpent with 5 faces, and in the local traditions, she is said to have created even the highest gods, the Thrimurthy. As such, she is called "Peddamma": "Great Mother".

As an avatar of Shakthi, she was the princess Renuka, who was murdered by her son (Parasurama)and husband (Jamadagni). They beheaded her over some small breech in conduct. Some versions say that she laughed at a child who was playing with bells while her husband was meditaing, and thus disturbed him. Most versions say that She felt a quiet desire for a handsome angel, and her husband (having sensed this)went mad with jealousy.

After all the above occurances Renuka, and a Pariah woman who tries to protect her, are murdered by her son and by her husband by decapitation. Her 4 other sons also tried to protect her. Because of this, they are "cursed" to become hermaphrodites by their father. Thus, Mariyamman has a dear affection for transgender people. In South India, these people often trace their origins to her four loyal sons. She is often attended by Joggappas: gay men who dress like women for ceremonial purposes. This isnt to say India is a gay-friendly culture, but gay people have always been welcome in Mariyamman's religion.

After they are killed, Mariyamman and the Pariah woman who was killed with her call out to the gods to witness the injustice. The gods seek to compensate them by transforming them into goddesses: Mariyamma and EllaiAmma. Both are believed to be intergchangable with the other, and each is believed to have had the head of the other transposed onto her body during their ressurections.

Having suffered so badly at the hands of high-caste men, these goddesses are thought to have a deep sense of sympathy for the weak and downtrodden, whose champions they are thought to be. Most local legends of Mariyamman will tell of her quick defense of abused wives and orphaned children.

Mariyamman and Ellaiyamman are considered either sisters, daughters or variations of Goddess Kaali/Durga. These goddesses are often worshipped together. When worshipped with other Shakthis, they are generally addressed as the "Elu Kanni Ammar", or "7 Divine Maidens".

In the part of India from which I come, MAriyamma has a very important sub-Shrine in an ancient Kaali temple called Kodungalur. There, her sub-shrine is operated entirely by older women from the Nair community, who claim her as an ancestral relative.

But Mariyamman's major shrines are in the Tamil heartland. Her most important temples are Samayapuram, Mel Maruvathoor, Punainallor and Thiruverkadu. But her shrines are ubiquitous, sometimes with several temples in one locale. And small chapels and standing stones for her are always set up at village boundries, which she guards. She sometimes shows a fierce, Kaali-like face to scare off troublesome spirits that might disturb the village.

As an Earth deity, her idol will often be a simple stone face jutting from the ground, with the visual implication that her body is the Earth itself.

Of course, deities in India will vary according to regional particulars, but the above ahould give you a basic understanding of this goddess.

Thank you so much for your interesting comments. I did not know any of the background of the Goddess Mariyamman. How horrible that her husband and one of her sons killed her and the lady who tried to protect her! Downtrodden people everywhere need someone to look out for them. We need a Goddess like Mariyamman here in the USA. It doesn't seem the God most Americans believe in is doing a very good job.