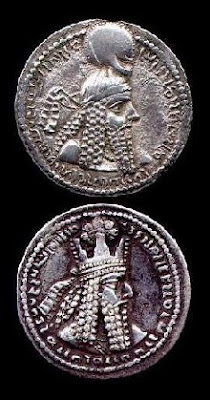 LONDON, (CAIS) -- The first volume of the catalogue titled “Sasanian Coins” will be published in the near future in a collaborative effort by Iran’s National Museum and the British Museum.

Iran’s National Museum’s Curator of Coins Marzieh Elaheh Asgari and Vesta Sarkhosh Curtis, the Curator of Islamic and Iranian Coins, in the department of Coins and Medals at the British Museum, have studied more than 5000 coins in the collections in Tehran and London.

The results of Sasanian Coin Project will be published in three volumes according to a Memorandum of Understanding which was signed between the museums 10 years ago.

Sasanian coins present the political, social and cultural conditions of the dynasty, and these volumes will be a valuable resource for the academic community and cultural enthusiasts. Each coin will be illustrated and described in the catalogue and the information will also go online. The following volumes are due to be published next summer.

Vesta Sarkhosh Curtis is responsible for the British Museum’s collection of pre-Islamic Iranian coins (from the third century BCE until the middle of the seventh century CE), which includes both Parthian and Sasanian dynastic coins. She also looks after coins of the Islamic era beginning with the Samanid and Buyid, Seljuk, Ilkhanid and Timurid, Safavid and Qajar dynasties of Iran.

The fourth Iranian dynasty, the Sasanians came to power in 224 CE, when Ardashir, a local king from Pars in southern Iran, seized the crown and became the new King of Kings of Iran. The Sasanians remained the most powerful empire in the ancient Near East until the advent of Islam and the Arab invasion of Iran in 651 CE.

Sasanian coins:
Sasanian coins are an important primary source for the history, economics and religion of this dynasty. From the beginning, the image of the king with his elaborate crown appears on the front and a Zoroastrian fire altar is shown on the back. The crowns incorporate symbols, such as wings, which are associated with the Zoroastrian religion and idea of kingship. The coin inscriptions, which are in Middle Persian (Sasanid-Pahlavi), give the king’s name, his religious affiliation as a worshipper of Ahuramazda, the Zoroastrian Wise Lord.