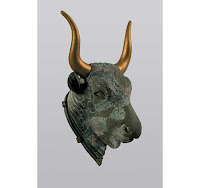 From ArtDaily.org
Posted February 16, 2008
Ancient Minoan Culture Comes To Life At The Onassis Cultural Center
(The article was evidently copied from another website without all of the embedded graphics - you'll see as you read where they are referenced. The bull's head rhyton image: Late Minoan IB, Palace at Zakros, West Wing. Herakleion Archaeological Museum).

NEW YORK.-On March 13, 2008, more than 280 artifacts from the ancient land of Crete, most of which have never been shown outside of Greece, will be on view at the Onassis Cultural Center. From the Land of the Labyrinth: Minoan Crete, 3000 – 1100 BC features a wide range of rare objects revealing the history of Crete’s luminous Minoan civilization, the first fully-developed culture to establish itself on European soil. On view through September 13, 2008, the exhibition uses ancient artifacts and works of art to reveal aspects of daily life in the Minoan civilization—including social structure, communications, bureaucratic organization, religion and technology—during the second and third millennia B.C.

The exhibition will chronologically map in 11 thematic sections covering the establishment and great achievements of the Minoan culture. As the first advanced civilization to arise in the European region, the exhibition explores the historical and cultural context of this celebrated society, and sheds light on its mystery. Information gathered from studies of the Early, Middle, and Late Minoan periods—also referred to as the Prepalatial, Protopalatial, Neopalatial and Postpalatial periods—is derived mostly from objects excavated from the island’s burial grounds and settlements. It is known that Minoan civilization was named after the legendary King Minos of Knossos , who commissioned the Labyrinth, a mazelike structure made famous in Greek mythology. Through each themed-section, the exhibition will piece together the culture’s past with objects—such as the gold jewelry deposited in the rich tombs of the elite, the inscribed clay tablets that disclose the fundamentals of the Minoan economy, ceremonial vessels found in the palaces and tombs, and votive figures of clay as symbolic offerings to protective deities—on loan exclusively from the archaeological museums in Crete, in collaboration with the Hellenic Ministry of Culture.

The island of Crete is equidistant from its three surrounding continents of Africa, Asia, and the rest of Europe . As a result of this advantageous location, the Minoans experienced a period of active trade with the other civilizations around the Mediterranean basin and maintained control over the sea routes. Exports consisted of timber, foodstuffs, cloth, and olive oil, while Cretans imported tin, copper, silver, emery, fine stones, and some manufactured objects. For their basic needs, however, the Minoans were self-sufficient.

The archaeological evidence from the Prepalatial period reveals great changes taking place in the social structure of the Early Minoan society, including the rise of local elite populations that tended to invest in self-promotion and to display their social identity and rank. Social differentiation gradually led to the formation of a palatial society during the Middle Minoan or Protopalatial period around 1900 BC. Urbanization and increasing economic wealth brought about bureaucratic change, including the powerful rise of social classes and ruling groups. Major palaces were built at Knossos and Malia in the northern part of Crete , at Phaistos in the south, and at Zakros in the east. These palaces were large building complexes that were the centers of religious, economic, and social life for their inhabitants. The architecture and layout of the palaces communicate a dynastic message through objects and symbols of the ruler’s power and prestige.

With the palaces came the development of writing, probably as a result of the new record-keeping demands of the palace economy. The Minoans used two types of scripts, a hieroglyphic script most likely influenced by Egypt, and a linear script, Linear A, perhaps influenced by the language of the eastern Mediterranean, which has yet to be deciphered. In Scripts and Weights, examples of this mysterious script will be displayed, including this example, Linear A Tablet. This sun-dried clay slab is from the end of the Late Minoan I period and exemplifies the administrative records—that recorded products, goods and people—scripted on similar objects. Inscriptions are also on various important objects, such as double-sided axes, pottery, seals, and stone vessels. The exhibition also includes tablets in Linear B script, deciphered in the 1950s by M. Ventris and J. Chadwick. Although borrowed by the Linear A, the symbols of this script render an early form of the Greek language, spoken by the Myceneans that had already reached Crete.

The Religion and Ritual section of the exhibition reveals one of the most important and fascinating aspects of the Minoan culture. The figure of a female goddess, the protector of nature and fertility, occupies the predominant place in the hierarchy of deities. Common sacred symbols of Minoan religion include the bull, such as the chlorite Bull’s Head Rhyton found at Zakros, and double axes made of bronze, silver or gold placed in areas of worship, such as this Votive Axe found in the Arkalochori cave. Numerous figurines depict worshipers, whereas animal figurines were symbolic offerings to deities.

The Colorful World of Murals section presents another form of communication developed in the Aegean by the Minoans—the art of large-scale wall paintings known as frescoes. Minoan painters covered the walls of palaces and urban mansions with images of the Cretan life around them or of special ceremonies. Using the fresco technique—applying earthy colors to wet surfaces that even today retain their vivid quality—iconic murals like the Partridge Fresco illustrate the animals, plant life, and people that surrounded them.

Workshops specialized in the production of palatial or personal items and luxurious objects, such as jewelry, seals, miniature artwork, and inlays for implements and furniture. Great strides were made in jewelry making, seal engraving and pottery production. As shown in the Pots and Potters, Seal Engraving: Great Art in Miniature and Jewels for Life and Death sections, artistic works of this period indicate advances made in specialized workshops. Exquisite filigree technique, granulated jewelry, and carved seal stones reveal their sensitivity to materials, which included clay, gold, stone, ivory, and bronze. A related section, Masterpieces in Stone, demonstrates the Minoan’s command over stoneworking, which resulted in an expanse of quality stone artifacts. Labor-intensive objects—sophisticated saucers, bowls, and bottles—were constructed with the use of progressive devices such as drills and polishing tools. Even everyday objects such as the Beekeping Vessel displayed in the section Alimentation and Aromatics, brings another dimension to this exhibit, bringing the viewer into the everyday activities of the ancient Minoan.

In the Final Palatial or Late Minoan III A-B period, the arrival of the Mycenaeans produced a shift in central power and the founding of a new dynasty. This represents the period of a change in the Minoan civilization with the establishment of the Mycenaean bureaucracy. The exhibition demonstrates that the serious changes brought about by this power shift are evident in new pottery shapes, well-constructed vaulted tombs, and the appearance of Linear B script. Lavishly decorated swords and a rare Boar’s Tusk Helmet such as those displayed in the Warriors and Weaponry section, along with other precious metals and jewelry, are evidence that a proud and ostentatious military class developed in Crete after the appearance of the Mycenaeans, from about 1450 to 1300 B.C.
Posted by Jan at 11:08 AM