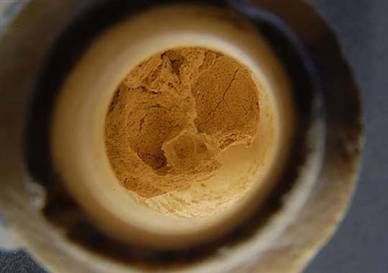 This story shows me that some things haven't changed very much in 2200 years! This sounds something like the classic Pond's cold cream. Story from MSNBC online: 2,000-year-old cream shows aristocrat’s taste Tuscan discovery was found almost intact in a cosmetics case By Rossella Lorenzi updated 6:15 p.m. CT, Fri., July 10, 2009 Italian archaeologists have discovered lotion that is over 2,000 years old, left almost intact in the cosmetic case of an aristocratic Etruscan woman. The discovery, which occurred four years ago in a necropolis near the Tuscan town of Chiusi, has just been made public, following chemical analysis which identified the original compounds of the ancient ointment. The team reports their findings in the July issue of the Journal of Archaeological Science. Dating to the second half of the second century B.C., the intact tomb was found sealed by a large terracotta tile. The site featured a red-purple painted inscription with the name of the deceased: Thana Presnti Plecunia Umranalisa. "From the formula of the name, we learn that Thana Plecunia was the daughter of a lady named Umranei, a member of one of the most important aristocratic families of Chiusi," the researchers wrote. Indeed, the wide rectangular niche tomb certainly represents the noble origins of the deceased. The ashes of Thana rested in a small travertine urn, decorated with luxuriant foliate elements and the head of a female goddess, most likely the Etruscan Earth goddess Cel Ati. Nearby, the archaeologists found a cosmetic case, richly decorated with bone, ivory, tin and bronze elements. The feet of the box featured bone carved in the shape of Sirens. The case was filled with precious personal objects: a couple of bronze finger rings, a pair of tweezers, two combs and an alabaster unguentarium vessel — a vase-shaped jar — of Egyptian origins. "The entire content of the cosmetic case was found under a clay layer which deposited throughout time. This made it possible for the ointment to survive almost intact despite (the fact that) the vessel had no cap," Erika Ribechini, a researcher at the department of chemistry and industrial chemistry of Pisa University, told Discovery News. Solid, homogeneous and pale yellow, the ointment revealed fatty acids in high abundance. "This is almost unique in archaeology. Even though more than 2,000 years have passed, the oxidation of the organic material has not yet been completed. This is most likely due to the sealing of the alabaster unguentarium by the clayish earth, which prevented contact with oxygen," Ribechini said. After analyzing the material, the researchers established that the contents of the vessel consisted of a mixture of substances of lipids and resins. "The natural resins were the pine resin, exudated from Pinaceae, and the mastic resin, from Anacardiaceae trees. The lipid was a vegetable oil, most likely moringa oil, which was used by the Egyptians and Greeks to produce ointments and perfumes," Ribechini said. Also called myrobalan oil, moringa oil was mentioned by Roman scholar Pliny the Elder (23 A.D. - 79 A.D.) in his celebrated Natural History as one of the ingredients in the recipe of a "regal perfume" for the king of Parthes. Since moringa trees were not found in Italy — they are native to Sudan and Egypt — and given the Egyptian origins of the alabaster unguentarium, the researchers concluded that the ointment was imported to Etruria.
Posted by Jan at 12:03 PM