Vinland Map Back in the News 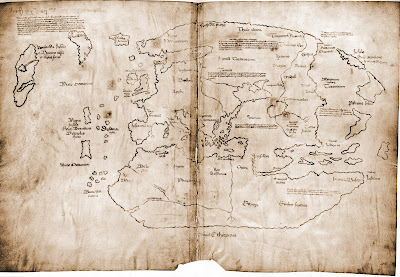 I love old maps, I find them - and their stories - absolutely fascinating! The Vinland Map is one of the most controversial. Is it real? Is it a fabulous fake? Article at Reuters Vinland Map of America no forgery, expert says Fri Jul 17, 2009 5:09pm EDT By John Acher COPENHAGEN (Reuters) - The 15th century Vinland Map, the first known map to show part of America before explorer Christopher Columbus landed on the continent, is almost certainly genuine, a Danish expert said Friday. Controversy has swirled around the map since it came to light in the 1950s, many scholars suspecting it was a hoax meant to prove that Vikings were the first Europeans to land in North America -- a claim confirmed by a 1960 archaeological find. Doubts about the map lingered even after the use of carbon dating as a way of establishing the age of an object. "All the tests that we have done over the past five years -- on the materials and other aspects -- do not show any signs of forgery," Rene Larsen, rector of the School of Conservation under the Royal Danish Academy of Fine Arts, told Reuters. He presented his team's findings at an international cartographers' conference in the Danish capital Friday. The map shows both Greenland and a western Atlantic island "Vinilanda Insula," the Vinland of the Icelandic sagas, now linked by scholars to Newfoundland where Norsemen under Leif Eriksson settled around AD 1000. Larsen said his team carried out studies of the ink, writing, wormholes and parchment of the map, which is housed at Yale University in the United States. He said wormholes, caused by wood beetles, were consistent with wormholes in the books with which the map was bound. He said claims the ink was too recent because it contained a substance called anatase titanium dioxide could be rejected because medieval maps have been found with the same substance, which probably came from sand used to dry wet ink. American scholars have carbon dated the map to about 1440, about 50 years before Columbus "discovered" the New World in 1492. Scholars believe it was produced for a 1440 church council at Basel, Switzerland. The Vinland Map is not a "Viking map" and does not alter the historical understanding of who first sailed to North America. But if it is genuine, it shows that the New World was known not only to Norsemen but also to other Europeans at least half a century before Columbus's voyage. It was bought from a Swiss dealer by an American after the British Museum turned it down in 1957. It was subsequently bought for Yale University by a wealthy Yale alumnus, Paul Mellon, and published with fanfare in 1965. The lack of a provenance has caused much of the controversy. Where the map came from and how it came into the hands of the Swiss dealer after World War Two remain a mystery. (Editing by Tim Pearce)
Posted by Jan at 7:13 PM

Acher wrote: "He [Larsen] claims the ink was too recent because it contained a substance called anatase titanium dioxide could be rejected because medieval maps have been found with the same substance, which probably came from sand used to dry wet ink."

These assertions by Larsen are pure conjecture, and are not backed up by any experimental data or other actual evidence. His "claims" are incorrect. The Vinland Map is back in the news because a journalist simply accepted verbal claims without verifying the evidence to support them. Larsen's conclusion is merely an opinion and may be safely ignored. Read: Archaeometry v. 50, (2008), pp. 887–893.

Other people were in America first .. they wrote in Paleo Hebrew in New Mexico. What message could they possibly write .. the Ten Commandments. Hebrew passed through a series of changes and each new aleph bet has been dated, the Paleo goes back to 1,000 B.C. If one thinks this was just a fluke .. some Indians lucked out and were able to write the Ten Commandments in the Adamic Language .. then check out the huge amount of multi-national dabree left in the East Coast from a King David Consortium of nations .. which the Bible says happened under the leadership of King David while he accumulated the metals needed to build the first temple. Read Steven M. Collins four book package at his site "The Abrahamic Covenants."

Usually, the only people who deny true history are the evolutionist that founded the lies that are collectively called Greco Roman history. They deny God and his ability to control the events of man on earth and write them in ancient times predicting what the future holds .. like the death of the two witnesses that are coming and the beginning of the attack by Russia, China etc. on Israel, Briton, the United States and Australia within three days .. Ezekiel 38-39 .. also fully discussed at Mr. Collins site at stevenmcollins.com.