It's easier than you might think to become a collector. In my house, I have the following chess sets: (1) a magnetized plastic mini-travel set; (2) an alabaster lathe-turned set and board; (3) a mahogony inlaid board and replica Lewis chess set; and (4) a carved wood set that rests inside a folding board. The style is what I would call "modern" and they are very tactile - I love playing chess with those pieces! I wasn't even trying to "collect" sets, LOL! The (1) set was received as a promotional gift back in 1999 when I joined the USCF. The (2) set was purchased on a whim one Christmas season when one of those temporary stores opened up in the mall downtown and I walked past it one day during lunch hour. I don't remember the exact price, but it was under $40. That sucker was heavy and it took me and a friend to lug it from the store back to the office, and from the office to her car after work! What a work-out! That was perhaps 6-7 years ago. As it sits in the family room off of the kitchen at the back of the house (a popular space), I've played a lot of games with that set. The (3) set was a gift I received in September, 2002 from a colleague on the occasion of both of our leaving a firm we'd worked together at for over 12 years. The (4) set was purchased in 2001 on a whim at Napoleon's, a store that carried all kinds of chess stuff (unfortunately, Napoleon's went out of business a couple of years later). I paid $80 for the set, the most money I've forked out for a set! I used to have a basic 12-inch wood board with the squares painted on, with machined but serviceable pieces that was purchased at a Kay-Bee Toy Store in 1999, but it was donated to a charity years ago. One wouldn't ordinarily think that this would be a contribution that would end up anywhere else than in the garbage can - but you would be surprised! Chess sets are regularly requested items at Christmas. My employer participates in a program - you've probably heard of or participated in something similar yourself - where a local organization aiding the disadvantaged is sponsored. Tags with requested gifts (priced $20 USD or less) are hung on a Christmas tree and you can pick a tag. You purchase the gift, wrap it, and put it under the tree. Prior to Christmas all of the donated gifts are delivered to the local charity and handed out to the recipients. I can always find a tag where a chess set is requested. (I have used the online shop that benefits the Susan Polgar Foundation, Inc. to purchase sturdy tournament-quality plastic sets and vinyl roll-up boards). I can see where the process of acquiring chess sets can become quite addicting! There are such gorgeous sets out there, each one more beautiful, or unique, or ugly or - whatever - than the next. The key to collecting, as it is to many other endeavors, is knowledge - and staying away from e-bay :) To acquire knowledge, hang around with people who have it, such as the folks who are members of Chess Collectors International. CCI puts out a quarterly newsletter that features articles on collecting and photographs of sets and other information, and holds a couple gatherings a year in different places all over the world. Read books on collecting and chess sets. Visit exhibits if you can. A lot of information is now available online (thank Goddess for the internet). I recommend you buy what "speaks" to you. My feeling is that if you buy what you like, you won't go wrong. That is the opposite, of course, of collectors who buy with an eye toward investing in something they hope will appreciate in value over time. Then, provenance, design, uniqueness of materials, rarity, etc. become important. So, you'll have to decide what kind of collector you'll be - and what your budget allows. One does not have to be a millionaire though, in order to start a collection of chess sets - as you can I've become something of an accidental "collector" myself and my family thinks I'm nuts! (Probably am...) Visit the online sites of Christie's and Sotheby's auction houses, for instance, do a search for "chess" and you'll see what I mean. Sets can be purchased at auction for under $100 USD, and many antique sets for between $100-200 USD. The sets that are pictured in this blog post are from auctions that Christie's held. Bonham's and other regional auction houses also regularly feature chess sets in their auctions. I sometimes visit the websites of my favorite auction houses and check out what they have coming up for sale or what recently sold. Sometimes I dig further back into the archives of past sales. Here are just a few from a sale at Christies.com that tickled my fancy: 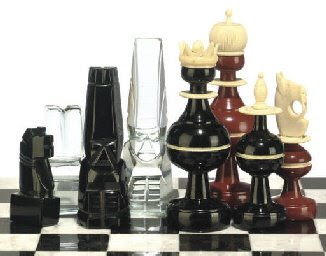 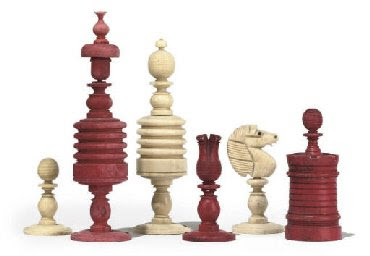