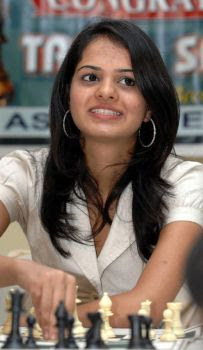 Summarized from The Times of India: AICF recommends Negi, Tania for Arjuna Mohammad Amin-ul Islam, TNN 17 July 2009, 12:36am IST New Dehli: Here's some good news for Capital's chess followers. Grandmaster Parimarjan Negi and International Master Tania Sachdev are the only two recommended by All India Chess Federation (AICF) for this year's Arjuna awards. Interestingly, till date, no chess player from the Capital has got this award. Last year, Dronavalli Harika was the only Arjuna awardee in chess. While Negi became world's second youngest GM in 2006, Tania is still an IM beside being a WGM which doesn't fall in the same rank as a GM which is harder to achieve. Arjuna awardees in chess over the years: Manuel Aaron (1961), Rohini Khadlikar (1980), Dibyendu Barua (1983), Pravin Thipsay (1984), V Anand(1985), DV Prasad (1987), Bhagyashree Thipsay (1987), Anupama Gokhale (1990), S Vijayalakshmi (2000), K Sasikiran (2002), Koneru Humpy (2003), Surya Sekhar Ganguly (2005), P Harikrishna (2006), D Harika (2008). (Bolded names are female).
Posted by Jan at 6:43 PM

Congratulations Tania sachdev for getting the Arjuna award..-By Kishore