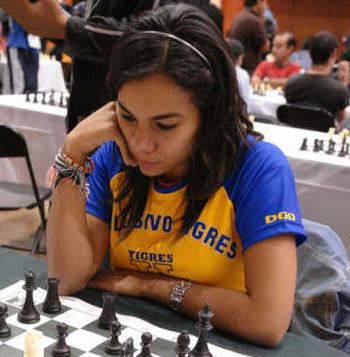 From UNAL Website Her Focus: Checkmate in the International Tournaments Date: (15/7/2009) Facultad de Ingeniería Mecánica y Eléctrica Aurora Stella Esquivel — FIME´s student that represents the UANL in chess — faces new challenges before the world preliminary and the Centro American and Open Chess Tournament. By Karolina E. Cárdenas Acosta After seven years reigning within the State and Regional Chess Tournament and a National Championship — obtained in August 2008 in Mexico City by competing against 49 participants in the open category — Aurora Stella Esquivel de Leon will encounter a new challenge. Supported by our Leading Academic Institution’s President, Engineer Jose Antonio Gonzalez Treviño, the young chess player participates in international competitions promoted by her father, Joaquin Manuel Esquivel Rivera and by the Cuban trainer, Justo Triano. Her long experience in this board game has taken her to the most important tournaments by being part of the national selections for either individual or team’s competitions. Such was the case of the individual world’s eliminatory round that currently takes place in El Salvador — from July 10th to the 15th — and where the best chess players from Colombia, Puerto Rico, Cuba, Venezuela, and Mexico compete. In the same way, and after her commitment in that country is fulfilled, the 18 year-old player will participate in the Centro American and Open Chess Tournament in Colombia. However, her agenda has no empty pages. When she comes back to Mexico she will show her best moves and strategies at the “UAEM 2009 Universidad Nacional,” which will take place from August 24th to September 9th in Cuernavaca, Morelos. Besides, she will also partake in other tournaments, on the next month, within the country. Expert chess player reveals the secret to success After ten years of experience in the mental sport — due to the complexity and the intellectual exercise to which the player is subjected to —, the fifth semester School of Mechanical and Electrical Engineering’s (Spanish abbreviation FIME) student assures that training, effort, and this sports liking are key for the triumph. “Training is essential for the chess´ development. The player must know how to memorize, and analyze the game in order to have alternatives. I practice on the Internet to get familiar with more movements,” explains the national champion and the national selection representative. Her experience at the Pan-American Games in Ecuador 2005, the interuniversity tournaments, the “Universiadas Nacionales,” and the World Championship in Germany,— where she participated with the Mexican Olympic team — are proof of her quality in this board game. Though this has been his favorite game, a few people know the other side of the story of such a brilliant player for this versatile student of Electronics and Communications Engineering practices more than one. Basketball, softball, and soccer are part of Aurora Esquivel sport’s résumé. “I have always loved sports, and I have had the opportunity to stand out in some of them, mostly in softball and football soccer,” commented the FIME´s team leading player, with which she was twice champion in the Football Soccer University´s Tournament. Backed up by her perseverance, intelligence, and capacity, this multifaceted sports player, embarks in this trip with the purpose of becoming the world’s champion.
Posted by Jan at 6:59 PM

But as far as I know "Chess Queen" is copyrighted to the current world champion and cannot be used here.

GM Kosteniuk deserved to win the Women's World Chess Champion crown for her fine play in Nalchik and she can justifiably be very proud of her accomplishments in her chess career. She is a fine role model.

How can a generic term be copyrighted? "Chess Queen" has been and continues to be applied to a number of females who have excelled at the game of chess, such as GM Judit Polgar, GM Koneru Humpy, GM Antoaneta Stefanova, as well as to other female chessplayers who have not achieved the level of success and fame of those GMs. There are hundreds of examples in texts on the internet and in newsprint articles, and not all of them are references to GM Kosteniuk.