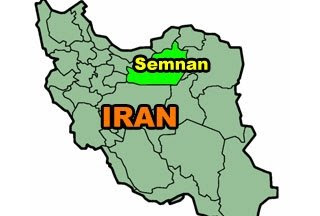 Since again the location was clearly indicated in this press report, thank the Goddess this is "merely" a Paleolithic site, with no gold, no pottery, no ancient gameboards - will the looters flock there? Let's hope not. One could suspect, since this is an official outlet of the Islamist government of Iran, that the government publishes such details in the hopes that looters WILL invade valuable archaeological sites and destroy them - thereby wiping out the history of the area prior to the rise of Islam. Very very sad. Please note, where that curved indentation along the northern border of the country lies the Caspian Sea. Iran's largest Paleolithic site found in Semnan Sat, 11 Jul 2009 17:07:53 GMT Archeologists have found Iran's largest Paleolithic area in the Mirk hill, located in the southern part of the city of Semnan. Dating back to the middle-Paleolithic era, the 4-hectare area has yielded numerous ancient objects belonging to Neanderthals. “Studies show that Paleolithic people had been living in this region between 40,000 to 200,000 years ago,” said head of the archeology team Hamed Vahdatinasab. “The area is very important in the sense that it is the largest of its kind in Iran and the Middle East and houses thousands of ancient stone tools,” he added. Vahdatinasab also said that the source of stone for the inhabitants was found 16-kilometers from the site in the hillsides looking onto Semnan. The recent finds were discovered during archeological studies in the natural hills of Delazeyan and Mirk, which were first excavated around 1984. TE/HGH
Posted by Jan at 12:36 PM