Yes, I'm late again. I decided to do this rather than cut the grass - but I'm feeling guilty about my shaggy looking backyard so I'll get out there shortly (now two hours later and I'm still blogging...) In the meantime, hope you enjoy this eclectic collection of stories and articles: 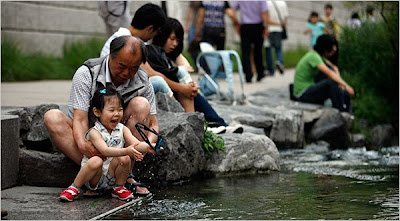 Making urban living better by restoring an ancient waterway: Peeling Back Pavement to Expose Watery Havens. A lengthy but interesting article about what Seoul, South Korea did to restore an ancient stream bed flowing through the heart of the city that had been paved over for ages, and the unexpected benefits that occurred as a result. I think the photo says it all. American city planners - take note. Done right, this would be a way to get people back into the hearts of declining Rust Belt cities. A horrifying story out of Uganda about "ritual killings" a/k/a child sacrifice. The Ugandan Parliament is now "in the process" of crafting legislation that will make child sacrifice a "capital" crime. Guess it's still okay to sacrifice kids in the meantime. Stupid is as stupid does. At the same time the Chinese Communist Corrupts are facing massive increases in people rioting across the land because of justice denied and seething, unaddressed grievances, the government closes down a volunteer lawyer group and is stripping licenses from other attorneys. Talk about cutting one's nose off to spite one's face! The only thing the Chinese Communists have learned from Iran is to stifle the internet and tweeting faster. Guess what guys, that is not going to stop the people in either country. Three guesses as to what will happen to the corrupt Communist regime in China - the same thing that is going to happen to the corrupt Nazi regime in Iran. The only question is when :) 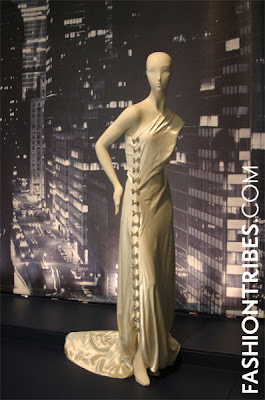 Designing Women: -- Madeleine Vionnet threw out the corset and set women's bodies free. (Photo: Vionnet ivory bias-cut silk gown, from Fashiontribes). -- A Jewish girl from the lower east side moves uptown NYC and becomes Hattie Carnegie, one of the most influential designers in American history. Was the speed of light at one time faster than the speed of light? Thinking outside the "box" - and a lesson in questioning underlying assumptions.
Posted by Jan at 12:21 PM