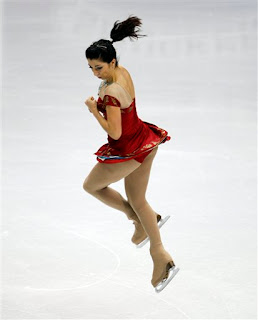 The Ladies' Short program is on t.v. right now (I'm on commercial t.v. only, too cheap to pay outrageous $$$ for cable television or satelitte TV -- so I'm watching time-delayed and trying to follow live progress on NBC's Olympics coverage website). Photo - I believe this is from the 2009 European Championships, where Ms. Karademir finished in
a very respectable 10th place.

Earlier this evening I had a chance to watch the short program performance of a young lady from Turkey - Tugba Karademir.  The back-story is charming - as was the young lady.  She is the first figure skater ever to perform in a Winter Olympics from her country, having skated in 2006 in Torino.  Even better, in 2010 her mom and dad were able to be in the audience at Vancouver to watch her performance.

I'm pleased to say that I thought she did very well!  She is a lovely young lady (born 1985).  As far as I could tell, she skated cleanly, but she was a little slow on the ice. She now resides in Barrie, Canada and trains in Canada.

I liked her music and I thought her costume was flattering and also suited the music perfectly.  I thought her program was very nicely constructed and also suited the music very well.  I would like to see more of this skater.  She scored high enough to qualify for the free skate on Thursday.  Her total score was 50.74.  At this point, I cannot say what her final ranking will be in the short program, there are many skaters yet to perform.

Here is Ms. Karademir's skating resume from the ISUFS website.
Posted by Jan at 9:32 PM

Does anyone know the music Tugba skated to on Thursday?

I could not find anything at the NBC Olympics coverage website, which is posting the Free Skate scores live. Tugba had some errors, unfortunately, in her Free Skate, and although she rallied near the end of her performance, I could tell she was very disappointed with it overall. She scored 78.80 and is currently in 10th place, but there are many skaters yet to perform.

I find her very charming and soft on the ice and I think she has very good lines. Perhaps her nerves got the better of her in the Free Skate.

I will continue to look for the name(s) of the score(s) that she skated to in the Free Skate on February 25.

Got the music selection from the ISU website:
Music:Tango de los Exilados

I don't know if this url will work:
http://www.vancouver2010.com/olympic-figure-skating/schedule-and-results/ladies-free-skating_fsw010101pB.html