When all is said and done, we know so little about ancient civlizations in Africa, other than what we know about Egypt, which I believe is usually classified as belonging to the Middle Eastern civilizations and/or the Mediterranean civlizations. Why is archaeology in sub-Saharan Africa so neglected?  If mankind arose out of Africa, then is it not likely that there were ancient centers where people amassed and created civilizations?  And yet, in my visits to the museums I have been able to get to through my travels, African exhibits mostly feature 19th and 20th century objects.  Does this mean that before this time African cultures produced nothing?  I don't believe that for a second!  So - where is the stuff?  Where is the history? 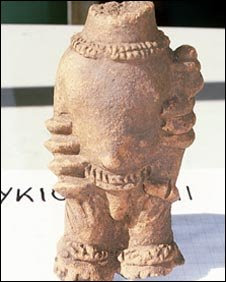 Archaeologists have unearthed dozens of clay figures in Ghana, shedding light on a sophisticated society which existed before the arrival of Islam.

Experts from the University of Ghana found 80 sculptures believed to be between 800 and 1,400 years old.

They believe the figures, depicting animal and human forms, are part of a burial ground or shrine.

Archaeologists say the societies that constructed the figures simply disappeared when Islam arrived.

"What is interesting is that the people now living in this area seem to have no connection with the makers of the figurines," said the university's Benjamin Kankpeyeng.

"That would suggest that that they have more in common with peoples living in other parts of West Africa - but we need to do more work before we can be certain."

The statues were found amid hundreds of mounds in a densely packed 30km-square area. [Surely this is evidence of a major settlement!]  Mr Kankpeyeng intends to analyse the position and arrangement of the statues with Tim Insoll from the UK's Manchester University.

Mr Insoll told the BBC very little was known about civilisations in the area between 600 and 1200 AD because no written history was kept and the societies ceased to exist when Islam arrived.

He said experts still did not know why the civilisations came to an end - whether the people converted en masse to Islam, or were captured by Arab slave traders.

The statues, he said, could tell historians what kind of people inhabited West Africa in that time.

"Figures have been found in this area before, but what we can do with the latest find is map their arrangement to find out what their purpose was - whether for sacrifice or some other ritual," he said.

The northern Ghana site, near the village of Yikpabongo, was first excavated in 1985, and the dig was restarted in 2007.

The latest batch of figures was discovered in January.

The round clay outline of a human body decorated with necklace, belt and bracelets has provided archaeologists with the first glimpse in possibly 1,400 years of a lost West African civilisation.

The discovery of 80 clay figurines from burial mounds in a remote area of northern Ghana is being hailed as evidence of the existence of a hitherto unknown but sophisticated society. It is hoped that the find will provide information about the region's pre-Islamic history.

A combined research team from the universities of Ghana and Manchester believe that the hundreds of mounds in the 20 square mile area of the dig were ancient shrines.

"These finds will help to fill a significant gap in our scant knowledge of this period before the Islamic empires developed in West Africa," said Professor Tim Insoll of Manchester University. "They were a sophisticated and technically advanced society: for example, some of the figurines were built in sections."

However, so far the find has thrown up more questions than answers as scientists puzzle over what appears to be a deliberate practice of breaking the figures into sections and placing them beside human skulls. Ghana's Dr Benjamin Kankpeyeng said: "The relative position of the figurines surrounded by human skulls means the mounds were the location of an ancient shrine. The skulls had their jawbones removed with teeth placed nearby – an act of religious significance."

The figures, including beautifully carved human and animal sculptures, are believed to be between 800 and 1,400 years old. The next step for the research team will be to carry out analysis of the residues of material which were packed into holes within the figurines to provide more clues about the society.

"We are certain that these people filled the holes with something, but the question is: was it a medicinal substance, or blood, or other material from a sacrifice?" Professor Insoll asked.

The scientists face a race against time to safely remove the current batch of figurines they have found – the first of which were located in 2007 – as illegal excavations are already encroaching on the site.

Looters have carried out hundreds of illegal digs nearby in search of Komaland terracottas, which were first unearthed in 1987. In the year following that official find, so-called Komaland figures started appearing in ever-increasing quantities in the art markets of Dakar, Paris and New York.
Posted by Jan at 4:32 PM