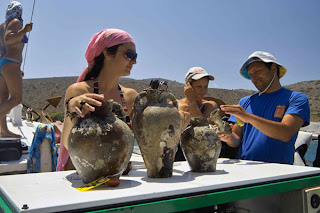 Crete has seduced archaeologists for more than a century, luring them to its rocky shores with fantastic tales of legendary kings, cunning deities, and mythical creatures. The largest of the Greek islands, Crete was the land of the Minoans (3100-1050 B.C.), a Bronze Age civilization named after its first ruler, King Minos, the "master of the seas" who is said to have rid the waters of pirates. According to Thucydides, he also established the first thalassocracy, or maritime empire. The Minoans were renowned for their seafaring prowess, which opened trade routes with the powerful kingdoms of Egypt, Anatolia, and the Levant.

Depictions of ships abound on Minoan seals and frescoes. They are detailed enough to show that the vessels were impressive: generally, they had 15 oars on each side and square sails, and were probably about 50 feet long. But little more was known about actual Minoan seafaring--until Greek archaeologist Elpida Hadjidaki became the first to discover a Minoan shipwreck.

. . . she asked team member Giorgos Klontzas to venture down. Hadjidaki anxiously prepared to wait on the boat for five hours, the average total time of a single dive plus stops to decompress. But Klontzas returned only half an hour later. "He came up with his hands full of ancient pots," she beams. "And he said to me, 'There's a whole world of them down there.' So I jumped into the sea and said, 'Let's go!' " Sure enough, cups, jugs, and amphoras lined the seafloor, and over the next couple of days the team brought several more samples to the surface.

In 2004, she expanded the team and mapped the site. The following year, large-scale excavation got underway. "Everything was buried in sand between rocks," Hadjidaki says. "As we excavated, we found more and more and more."

To date, Hadjidaki's team has raised some 209 ceramic vessels, about 80 of which are nearly whole and clearly identifiable as types of amphoras and large jars that would have transported liquids, possibly wine and olive oil, though no residues remain. A handful of artifacts, including cooking pots, jugs, a few cups, and fishing weights, likely belonged to the ship's crew.

Philip Betancourt, a Minoan pottery expert who codirected excavations at Pseira from 1986 to 1996, has examined the finds from the site. Even though no wood from the ship survives, he is convinced they belong to a wreck because they are an unusually large group of ceramic vessels that all date to the same period (Middle Minoan IIB, 1800-1700/1675 B.C.) and were all made on east Crete. "One doesn't get an assemblage like that," he says, "except from a very specialized context--in this case, a shipwreck." Furthermore, the pottery that was still in place was found upside down, which seems to indicate the ship completely capsized and wound up with the hull uppermost and the cargo down. "This may help explain why no wood was preserved," he says.

Hadjidaki has closely studied the arrangement of the finds, working with team architect Dimitri Timologos who drew underwater maps based on the artifacts' location. On the maps, she can trace a narrow trail of pottery about 100 feet long at the northern end of the wreck, where she believes the ship started to founder. The trail broadens into a roughly oval-shaped concentration that extends over an area 50 by 65 feet, from which she estimates--by the distribution of objects--the ship to have been between 32 and 50 feet long. Hadjidaki thinks it was similar to, but larger than, one depicted on a serpentinite seal stone excavated at Pseira in 1991. It shows a ship with a beak-shaped prow, high stern, and single mast connected to the vessel by ropes (but no oars, as in earlier representations of Minoan ships).

The type of clay from which the pottery was made suggests the ship took on cargo from at least two locations on east Crete. Based on the pottery, Hadjidaki and Betancourt believe this ship was not destined for a voyage abroad, but rather was making local stops. "This was probably a very common sight--these relatively small coastal vessels that dealt with local trade east and west along points of the island," says Betancourt. "The wreck gives us a lot of information on what was likely the normal trade practice of seafaring people." Jan Driessen, director of excavations at the Minoan settlement of Sissi on east Crete, agrees. "We know from frescoes and other iconographic material throughout Crete that the Minoans were good seamen, that they had large ships of different types," he says. "The Pseira wreck seems to represent a coast-hopping activity, short trajectories with specific 'clients.' It helps us visualize that process of distribution."

Hadjidaki completed the final season of excavations at the end of September 2009, recovering 60 more ceramic vessels. At press time, the finds were still soaking in fresh water to remove crusty layers of sea deposits. Next, they will be cleaned by conservators, studied by experts, including Betancourt, and join other artifacts from the site at the archaeological museum in Siteia on east Crete. But Hadjidaki already feels a sense of accomplishment. "It's the only Minoan shipwreck that has ever been found and excavated," she says with a broad smile. "Period."
Posted by Jan at 8:36 PM