Avast Ye Maties - Where the Hell is My Head? 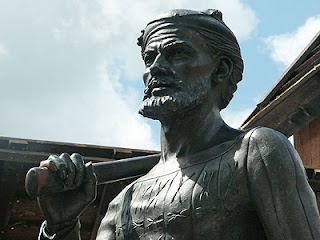 WHEN fearsome Baltic pirate Klaus Stortebeker was executed 600 years ago, his headless body is said to have walked 12m along the length of Hamburg quayside.
He had struck a deal with the elders of the port: any of his 70 men he managed to pass in his post-decapitation walk should be spared. The quivering corpse passed 11 fellow pirates before the executioner put out a foot and tripped him up.

Little wonder, then, that the skull of Stortebeker has fascinated Germans for so long -- and that its theft from a Hamburg museum last month has kept police busy. They interrogated members of the often reckless FC St Pauli fan club and dug deep into the city's Goth scene, before concentrating on a new possibility: that the pirate's skull has become a trophy in the turf wars between rival biker gangs.

On Saturday night, a skull was placed outside the offices of the Hamburger Morgenpost with "No Tacos" written on its crown. Tacos is slang for the biker group Bandidos, which is challenging the Hell's Angels for control over northern Germany's lucrative drugs trade. Ralph Wiechmann, the head of archeology at Hamburg Museum, was called in to examine the skull and ruled it belonged to a more recent corpse than that of Stortebeker.

The pirate's skull has a gaping hole on its right side, where it was nailed to a wooden stake outside the harbour gate to deter people from piracy. The latest skull bore axe wounds but no nail hole.

Even so, the local press continues to insist that a Hell's Angels chapter is the likely culprit. The Morgenpost cites an "insider from the biker scene" as saying the skull was offered to the Hell's Angels free of charge by an unnamed thief. "The piratical skull and crossbones is certainly part of the insignia of aggressive motorcycle gangs," a police investigator said.

Stortebeker is regarded as a Robin Hood or even a Che Guevara figure by many north Germans because he robbed the rich merchant ships of the Hanseatic League. However, evidence of him redistributing his booty to the poor is scarce. Legend has it that after his execution, Hamburg senators found the masts of his ships had cores of gold and silver.

The possibility that Stortebeker, who was decapitated in October 1401 (or a year earlier, by some accounts), aged 40, was little more than a bloodthirsty crook has not detracted from his iconic status. He has a statue honouring him in Hamburg and a brewery in Stralsund named after him. "The skull is an important relic of Hamburg history," said Hamburg Museum director Lisa Kosok. "It is priceless." It disappeared for a few centuries but re-emerged in 1878 during excavations to expand Hamburg harbour. The age of the skull was confirmed in 1999.

The Hamburg Senate failed to keep its promise to Stortebeker and the 11 men were not spared. After chopping off the heads of all of Stortebeker's pirates, the executioner was asked if he was not a little tired. He replied that he had enough energy to execute the Senate elders as well. This was probably intended as a joke -- but the Senate ordered the executioner to be beheaded.