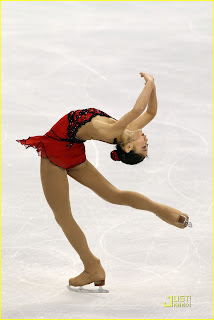 I'm sure no expert on figure skating, that's why I read what people who know the sport said about what happened in last night's Ladies Free Skate in Vancouver.  Then I form my own opinions.

I loved the skating last night.  I hated how chopped up the event was presented to the viewers on network television (I don't have cable or satellite - don't know if the coverage was any better).  I know that there are other events going on or were going on earlier in the day, but honestly, not to show at least the final 12 skaters with minimal interruption - you would have had a much bigger audience, NBC - really!

I think Yu-Na is an incredible skater and will only get better if she learns to relax a little bit more (of course, it was the Olympics and the hopes of an entire nation were riding on her slender shoulders) and connect with the audience a little bit more (needs work).  There is no doubt that she has that "IT" factor, and a lot of IT!  There is no question that she earned the gold medal with her short and free skate programs.  But - she was WAY over-scored.  Mao Asado skated MUCH better than what her scores reflected - or Yu-Na was over-scored.  It's as simple as that.  Yeah yeah, Asada had a couple of glitches.  So did Joannie Rochette.  Their scores were high, but within the realm of reality.  Yu-Na's scores were not.  And, I'm now thinking that as what happened with that scoring really sinks in, there is going to be a backlash in the minds of a lot of figure-skating fans around the world (not, of course, in South Korea).  What the hell were those judges thinking?

Rachel Flatt got hosed by the Olympics judges.  Rather ironic, considering that her team-mate, Mirai Nagasu, got hosed by the judges at the U.S. Nationals in January (photo of her, above, during one of her spins in the Olympics Ladies' free skate - look at those lines - perfect!)  I think Nagasu should have been skating at this Olympics as the U.S. Ladies Championship, not the U.S. silver medalist.  That being said, I thought that both U.S. ladies skated outstandingly.  I have not seen Flatt ever perform better.  I think she reached a whole new level with her skating, in her expression, ease and relating to the audience.  Well done, Rachel.  The so-called "incomplete rotations" on some of her jumps that were marked down - were not marked down for the other skaters.  Period, end of story.  I didn't make this up - I read it in plenty of other places but the writers were much more diplomatic about stating their conclusions that I am :)

Mirai Nagasu got super-hosed by the Olympics judges.  Joannie Rochette's  free-skate was marred by several minor errors (but she stayed on her feet), and Nagasu's free-skate was visually error-free.  But for the skewed scoring, Nagasu should have won the Bronze Medal.  Politics, sympathy and the fact that, at age 24, Rochette will probably not be competing at Sochi in 2014, all played into her being awarded the Bronze Medal. The fitting end to a career where she was always close but never quite lived up to her promise and, finally at the 2009 Worlds, scored Silver.  Did she earn it - yes - for her career.  Did she earn it for her performance at the Olympics?  Not in my opinion.  So, the judges split the difference and give Nagasu 4th place overall, in a nod to the "future" of U.S. figure-skating, which is here already - and should have been recognized as such.

And WHAT was with this scoring Miki Ando in 6th place in the free-skate, two places above Rachel Flatt?  Ando looked like a skating zombie in the free-skate, for Goddess sake!  She was a World Champion in 2007 and had a good Grand Prix series in 2009 - what happened?  I'm sorry to say it because I am a fan of hers, but there was absolutely no life to her free-skate whatsoever.  It was as if she had already given up after the short program, knowing that it was a foregone conclusion that the Gold/Silver/Bronze had been decided, barring some spectacular collapse of one of the top three in the free-skater (which did not happen, but there were errors by the #2 and #3 skaters that should have opened the doors).  Her eyes were dead.  It was scary and sad watching her.  Ando's performance did not deserve to be rated above Rachel Flatt's, who radiated joy and confidence all across the ice during her free skate. Flatt received a standing ovation - and deserved it.

Nagasu's and Flatt's performances shine.  I find it really really interesting how some commentators are trying to downgrade Nagasu as "not mature."  Give me a frigging break.  How old was Michelle Kwan when she won her first medal at the Worlds?  Look it up, dudes - geez!

Well, it's over - for now.  Worlds are next month.  I assume that both Flatt and Nagasu will be there, representing the US.  I expect both will be elevating their "A" game.  It's going to be interesting to see what happens with the scores.  Will Yu-Na's come back down to reality - or will she decide to skate in the Men's events from now on, as a more "worthy" challenge?
Posted by Jan at 9:16 PM