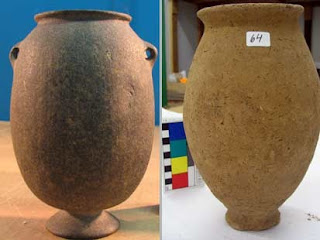 A U.S. Army helicopter pilot was charged in federal court in Manhattan today with selling 80 stolen antique Egyptian art objects, some of them 5,000 years old.

Edward Earle Johnson, an active U.S. Army helicopter pilot, according to the complaint unsealed in Manhattan federal court, earned about $20,000 from the sale of the objects to an American art dealer.

It was later determined that the antiquities came from a group of some 370 "pre-dynastic" objects stolen in late September 2002 from the Ma'adi Museum near Cairo, Egypt.

"The artifacts, dating to 3000 B.C. and earlier, were originally discovered during an excavation in Egypt in the 1920s and 1930s," according to a statement by the U.S. Attorney for the Southern District of New York Michael Garcia.

According to the complaint Johnson lied to an art dealer stating "that his grandfather had acquired the antiquities when he worked in Egypt in the 1930s and 1940s, and that the antiquities had remained in the family ever since."

"The art dealer later consigned pieces from that collection to galleries and collectors in New York, London, Zurich and Montreal."

According to the U.S. attorney's office, Johnson was arrested Tuesday in Enterprise, Ala.

He was charged with one count of transportation of stolen property and one count of wire fraud. If convicted, he faces a maximum sentence of 10 years' imprisonment on the stolen property count and five years' imprisonment on the wire fraud count. Johnson was released on a $25,000 bond and was required to surrender his diplomatic and civilian passports.
Posted by Jan at 1:19 PM