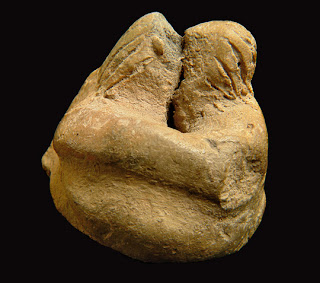 Ahhhhh, I'm such a sap for romance!

Here's a lovely little stone carving dating back to c. 3200 BCE from Malta, the island where the Goddess rules strong.

The Times of Malta reported on February 12, 2008 that Heritage Malta is to mark Valentine's Day by exhibiting a 5,000 old terracotta figurine depicting an embracing couple. The minute figurine has some fine incisions representing long hair on both figures.

The figurine, dating back to 3200 B.C is the only Maltese prehistoric presentation of an embracing couple, the agency said. It is being exhibited at the lobby of the National Museum of Archeology in Republic Street Valletta. Admission is free of charge.

Some examples of necklaces and axe pendants which were also unearthed from Malta’s Megalithic Temples and hypogea are also being exhibited alongside.
Posted by Jan at 8:18 PM