Was the Stanway Board Game Used in Divination? 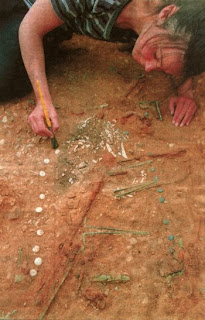 The board game excavated in a Roman era grave near Colchester in England first broke into the news in 1996. It's back in the news again, with this report at the Discovery Channel:

Feb. 11, 2008 -- Historical records tell of a mystical, priestly and learned class of elite individuals called Druids among Celtic societies in Britain, but there has been no archaeological evidence of their existence. Until, perhaps, now.

A series of graves found in a gravel quarry at Stanway near Colchester, Essex, have been dated to 40-60 A.D. At least one of the burials, it appears, may have been that of a Druid, according to a report published in British Archaeology.

Mike Pitts is the journal's editor and an archaeologist. He studied classical Greek and Roman texts that mention the Druids in early France and Britain. The most detailed description, Pitts found, dates to 55 B.C. and comes from Roman military and political leader Julius Caesar.

"Druids, he says, were prestigious ritual specialists who performed human sacrifices, acted as judges in disputes, were excused action in battle and taught the transmigration of souls -- when you die, your soul is passed on to another living being," Pitts told Discovery News.

Other historians link the Druids to soothsaying and healing practices.

Within the wooden, chambered burial site, researchers have excavated a wine warmer, cremated human remains, a cloak pinned with brooches, a jet bead, divining rods (for fortune-telling), a series of surgical instruments, a strainer bowl last used to brew Artemisia-containing tea, a board game carefully laid out with pieces in play, as well as other objects.

"This person was clearly a specialist and also clearly wealthy and powerful, as indicated by the special grave and its apparent location within the compound of a 'chief.' That would all fit Caesar's Druid," he said, adding that Caesar likely also visited Stanway during his lifetime.

The surgical kit found in the grave includes iron and copper alloy scalpels, a surgical saw, hooks, needles, forceps and probes. Pitts said the collection mirrors basic medical tools from other parts of the Roman world.

The board game and its arranged pieces, however, are anything but common. None other like it has ever been found at Roman-era sites in Great Britain.

Surviving metal corners and hinges from the board allowed Pitts to reconstruct it as an 8-inch by 12-inch rectangle. Raised sides suggest dice might have been used. The white and blue glass counters were positioned with care. Some were straight across the sides, another in a diagonal line and one white marker close to the board's center.

Pitts believes the game may have been another "divination tool," along with the rods, jet bead and scent bottles also excavated at Stanway.

Philip Crummy, director of the Colchester Archaeological Trust, told Discovery News that the person in the burial could very well have been a Druid "given the healing and divination attributes -- assuming that Druids could be trained in these skills."

Crummy agrees with Pitts that such individuals would have been "near the top of the social scale in Iron Age Britain."

He is, however, not yet convinced the person was Celtic, since the medical kit was "fairly Romanized" and the individual may have acted "like a Roman surgeon/doctor would have done."

"Divination was widely practiced in the Roman world too," he added.

Because of site's age and location, Pitts is more inclined to believe the person was indeed a Celtic Druid and could have been closely related to Cunobelin, a chief or king of the Catuvellauni tribe.

William Shakespeare immortalized Cunobelin as "Cymbeline" in a play of that same name. Cunobelin's sons led a heroic, yet failed, resistance against Roman Emperor Claudius' invasion of England in 43 A.D.
Posted by Jan at 8:50 PM