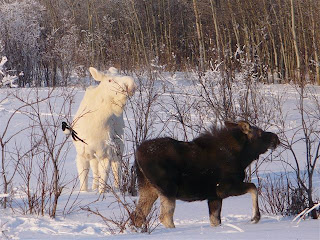 Wow! This reminded me of the story I published back in October about a small group of white (not albino) deer in northern Wisconsin - there was a stag in the photograph in that article.

There is also a very large albino moose (female) running around in Montana (in photo).

Here's the story about the Scottish white stag:

Since time immemorial it was a messenger from the afterlife, a mystical creature that chilled the blood of kings and commoners alike. But now a young white stag has appeared in the Highlands of Scotland, gathering his own legends.

The John Muir Trust, a conservation body, yesterday confirmed that a white stag is living at a secret location on the West Coast. He is believed to be the only white example of a red deer in Britain.

Officials have not disclosed the location where he has been spotted, but they confirmed that he was genuine by releasing photographic footage from two different sightings.

The most recent was two weeks ago when he had grown antlers and was running with a herd of other stags, wearing his heavy winter coat and in good condition, despite a harsh January. The first sighting had been last summer after he had shed his horns and was in his sleek coat.

Fran Lockhart, 45, from the trust, was on a field trip when she became the first person to catch the stag on film. She said: “It was quite thrilling – amazing to crawl up so close to such a magnificent-looking animal. He looked almost ghostlike next to the group of young red stags that he was mixing with. When he’s not moving he’s quite well camouflaged – he looks like a boulder covered in lichen.

“The wind was in my favour and I watched him for about 45 minutes. He and his wee bachelor herd were grazing along the hillside before me.”

An encounter with a white deer is said to bring about profound change in a person’s life, but Ms Lockhart said she had none to report. “I should have bought a lottery ticket the day I saw him,” she said ruefully.

The stag is believed to be young, perhaps 6 or 7 years old, and will not reach full maturity until 9 or 10. Conservationists say there is a chance that he might go on to sire white offspring when he mates. His colouring is from a recessive gene.

White deer are often mistakenly thought to be albinos, but their unusual condition is caused by leucism, a rare genetic pattern that causes a reduction in the pigment in the animal’s hair and skin. Unlike albinos, which have characteristically red eyes, deer with leucism have normal colouring in their eyes.

The John Muir Trust safeguards some of the largest areas of Scottish wilderness, but is refusing to hint where the stag is for fear of poachers.

The last recorded wild white stag in Britain was shot by poachers in October last year on the border between Devon and Cornwall. Farmers and gamekeepers, who called him Snowy, had kept quiet about the stag’s whereabouts in an attempt to protect him. The killing provoked outrage. The stag’s 300lb (136kg) body was found decapitated, suggesting that the head had been taken as a trophy.

Those who did the killing challenged centuries of legend, which says that those who kill a sacred white stag bring down a curse upon their heads.
Posted by Jan at 7:55 PM

Jan Douglas - www.jandouglas.co.uk is celebrating her 50 yrs in show business this year …. she has recorded her Scottish song ‘White Stag of Scotland’ … It would great for Jan to get some people listening to her song .
You can hear the song on you tube and there is video to go along with it! This is the link to it
http://www.youtube.com/watch?gl=GB&hl=en-GB&v=r8CIw8jJcTs

Jan heard about the legend of the white stag years ago and when she heard about the new sitting she finished her song … I hope you enjoy it and I it would great to hear your comments …..