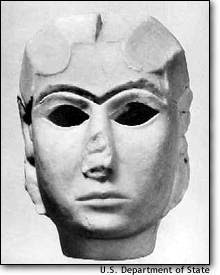 Dubai: A famous long-lost piece of ancient art has finally been recovered in Iraq last week, according to Arabic daily Al Khaleej.

The 'Sayedat Al Warkaa', a Sumerian 20cm facial curving [sic], known among archaeologists as the Sumerian Mona Lisa, and which is more than 5,000 years old, was found in a garden after the police and occupation forces received a report.

The marble statute was found buried in the shallow mud and totally unharmed.

So, why is Gulfnews.com reporting this OLD STORY as if it was FRONT PAGE BREAKING NEWS? By the way, the story was picked up by several different news sources and bloggers on the internet as CURRENT NEWS.

Notice the tagline I bolded at the beginning of the article - IT'S AN OUT AND OUT LIE!

Just what is the agenda of Gulfnews.com? By recycling this OLD STORY as CURRENT NEWS, is it taking a slap at the United States forces in Iraq? You know, the old line - it's all the fault of the USA that the looting took place, etc. etc. etc. Of course, it's NEVAH the fault of the looters!
Posted by Jan at 9:31 AM