Hola darlings! So, I've finished shoveling out the driveway, just in time for the next snow storm to appear on the horizon, which is supposed to begin tomorrow morning. Sigh. But, today, despite frigid temperatures and a non-relenting west wind, the sun is bright in the sky, it's warming up the house nicely and is quickly evaporating away the residue of what I could not shovel off of ice and snow in my driveway, and the snow boulders that I tossed into the road last night are now just so much snow mush! Cool!

Is the University of Texas as Brownsville replacing New York City as the chess hotbed of the USA? Hmmm...

One of the biggy private-invite tournaments of the season has started: Morelia-Linares. Linares used to be the sole procurator of this event, but I guess they got too poor, and Morelia got too much drug money, and so a match was made in chess er, well, not heaven. Anyway, you can tell who's calling the shots, because Morelia, in a third world country (no I will NOT apologize to Mexico, who continues to illegally mass export its poor and downtrodden across the Rio Grande), is going first, despite falling behind the "L" in Linares in the Roman alphabet and despite Linares being the originator of this great event. Yeah, yeah, I know what they say about the second half - but does that really hold with these oldies and moldies playing chess? Hmmm... Note, this is supposed to be the English version of the website (the Morelia version, at any rate). Take a look at the url - it puts Morelia before Linares. Guess that gives you a real hint about what the Mexicans think of their place in hosting one-half of this event again, hmmm....

The usual boring suspects are playing again this year (Anand, Shirov, Leko, Ivanchuk, Topolov, snore). Darlings, 20 years ago and via time machine, any one of these guys would have been more than old enough to be my father. For that matter, so would the latest crop of "youngsters" (who have been playing chess since they were born) - Carlsen, Rajabov, Aronian. Think about THAT... 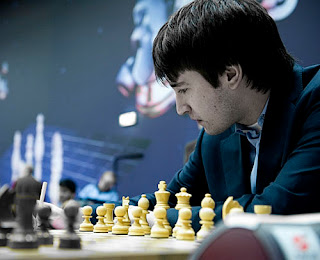 Some day, I'd LOVE to see Linares host a plethora of the top female players of the world, and invite one sacrificial male player, a real cutey, someone like...Cheparinov. Yeah, he's a schmuck, but he's cute - and he's young, so perhaps there is still has a chance for the youngster to develop some personality, and some perspective. Well, on second thought, maybe not. But he's still cute. Now that would be a tournament I'd pay attention to! (Photo: Cheparanov, Round 7, 2008 Corus - Wijk aan Zee)

Science news:
It's just a matter of time, now, before we're sending space ships out to the moons of Saturn to harvest hydrocarbons. Will THAT be the next major war hot spot in the 21st century?

Just Plain STRANGE!
Woman arrested for having a dream about a bomb.
Posted by Jan at 3:09 PM

That's a photo of Radjabov, not Cheparinov.

Is it really! Oh my! Well then, scratch Cheparinov from my dream tournament and insert Radjabov's name instead!