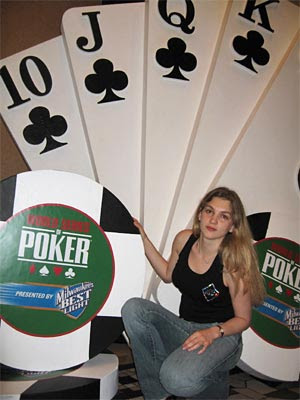 News from pokernewsdaily.com: Jordan Smith (scarface_79) Wins $2,000 No Limit Holdem Event at 2009 WSOP By Brett Collson for POKER NEWS DAILY Posted on June 21, 2009 For the first time in the year’s WSOP, two women made the final table of an open event. Laurence Grondin, from Montreal, and Almira Skripchenko, from Paris, were each members of the final table of Event #36. Only one female (Annie Duke) had made a final table in the first 35 events this year. Skripchenko exited in seventh place and it was Smith who did the dirty work. Grondin raised from late position and Smith made the call. Skripchenko then moved all-in from the small blind, Grondin got rid of her hand, and Smith called. Skripchenko’s pocket kings were well in front of the pocket fives of Smith, but a five on the flop spelled disaster for Skripchenko, who failed to catch a king on the turn or river to seal her elimination. The former European chess champion earned $78,664. (Photo credit: Almira en las WSOP 2006 - Fotografía Chess Base)
Posted by Jan at 5:01 PM