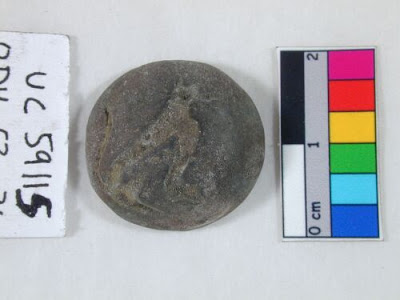 (Image: ancient Egyptian gaming piece with image of dog. Notice the collar, pointed ears and long tail. It is possible that several different breeds of dogs arose in ancient Egypt, including basenji, saluki, greyhounds, mastiffs, and others. See Egypt: The Dogs of Ancient Egypt). A look at dogs and "speech" (as in the kind of sounds that humans make). Maybe dogs can't talk in proper English, but they manage to communicate quite effectively with their human "masters" nonetheless! I know, I owned three doggies for a long time, until the last one passed to the Happy Hunting Ground in 2004. For sure the same goes on with dogs in different languages, all around the world. Story from Scientific American Online Fact or Fiction: Dogs Can Talk Are human speech-like vocalizations made by some mammals equivalent to conversation--or just a rough estimation of it? By Tina Adler Maya, a noisy, seven-year-old pooch, looks straight at me. And with just a little prompting from her owner says, "I love you." Actually, she says "Ahh rooo uuu!" Maya is working hard to produce what sounds like real speech. "She makes these sounds that really, really sound like words to everyone who hears her, but I think you have to believe," says her owner, Judy Brookes. You've probably seen this sort of scene on YouTube and David Letterman. These dog owners may be onto something: Psychologist and dog expert Stanley Coren of the University of British Columbia tells the story of a colleague who always greeted her dog, Brandy, with a cheerful, two-syllable "Hel-lo!" It wasn't long until Brandy returned the greeting, which sounded very much like her owner's salutation, says Coren, author of How to Speak Dog: Mastering the Art of Dog–Human Communication. But do dogs really talk? Back in 1912 Harry Miles Johnson of Johns Hopkins University said, emphatically, "no." In a paper in Science, he generally agreed with the findings of Oskar Pfungst of the Institute of Psychology at the University of Berlin who studied a dog famous for its large vocabulary. The dog's speech is "the production of vocal sounds which produce illusion in the hearer," Johnson wrote. He went on to warn that we should not be surprised if "scientists of a certain class…proclaim that they have completely demonstrated the presence in lower animals of 'intelligent imitation'." [Scientist of a "certain class? - what the hell does that mean?] Nothing in the last century has really changed that scientific opinion. (No one has ever questioned whether dogs communicate with each other, but calling it "talking" is something else.) So what are Maya and her cousins doing? It's more appropriate to call it imitating than talking, says Gary Lucas, a visiting scholar in psychology at Indiana University Bloomington. Dogs vocalize with each other to convey emotions—and they express their emotions by varying their tones, he says. So it pays for dogs to be sensitive to different tones. Dogs are able to imitate humans as well as they do because they pick up on the differences in our tonal patterns. Lucas likens this behavior to that of bonobos, primates that can imitate some tonal patterns, including vowel sounds, pitch changes, and rhythms, studies show. "The vocal skills of some of the dogs and cats on YouTube suggest that they might also have some selective tonal imitation skills," he says. What's happening between dog and owner-turned-voice-coach is fairly straightforward, Coren says: Owner hears the dog making a sound that resembles a phrase, says the phrase back to the dog, who then repeats the sound and is rewarded with a treat. Eventually the dog learns a modified version of her original sound. As Lucas puts it, "dogs have limited vocal imitation skills, so these sounds usually need to be shaped by selective attention and social reward." In the Letterman video "a pug says, 'I love you' and it's very cute, but the pug has no idea what it means," Coren says. "If dogs could talk, they would tell you, 'I'm just in it for the cookies.'" Scientists have made some progress in their study of this important subject: They've learned why dogs, and other animals, have rather poor pronunciation and, for example, completely botch consonants. They "don't use their tongues and lips very well, and that makes it difficult for them to match many of the sounds that their human partners make," Lucas says. "Try saying 'puppy' without using your lips and tongue." Rest of article.
************************************************************************** Note the resemblance between the word "basenji" (a breed of dog that may have arisen in ancient Egypt) and "basij/basiji" - the name for the government-backed but unofficial thugs who are evidently responsible for all terror, property damage, home invasions and killings of innocent protesters in Iran at this moment. Geez, those basiji are giving dogs a bad name!
Posted by Jan at 12:09 PM