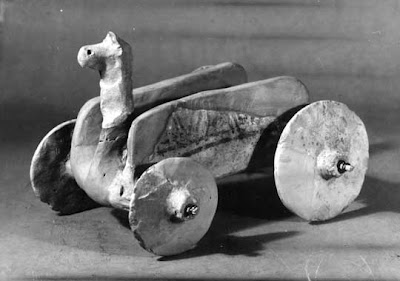 Men and their toys! When I was in high school the guys who attracted the girls had muscle cars, 450 hp eight (or more) cylinder Roadrunners, etc., with jazzy racing stripes :) Those days are long gone, but men have always liked their wheeled toys. Here, for instance, is a specimen (in miniature) from the 2nd half of the 3rd millenium BCE; if I'm doing my math right, that is about 2500-2000 BCE. If that is a "nostril" I'm seeing, than this is probably a camel - otherwise, my first impression was "possibly a horse." My question is - why isn't it out in front of the cart instead of looking like a "camel figurehead" (like on a ship) built into the cart? It was obviously not meant to be a real-life representation of a camel-pulled cart. The camel has no legs, for one thing, and there are no reins showing. It seems it was not meant to represent reality. On the other hand, I could easily imagine this model as a very early rook (the old war chariot chess piece used by the Persians). (Image: Lyubov Kircho, Early Wheels: This model dates to near the second part of the 3rd millennium B.C. and shows one of the first known carts. The model is now in St. Petersburg's State Hermitage museum.) The title of the article below is a bit misleading, because nowhere in the body of the article does it mention when this particular model was discovered and excavated; instead, it mentions "a new analysis." That seems to be a tip-off that this particular artifact (and others) have been known for some time. Models of Earliest (Camel-Pulled) Vehicles Found Jennifer Viegas, Discovery News June 26, 2009 -- Some of the world's first farmers may have sped around in two-wheeled carts pulled by camels and bulls, suggests a new analysis on tiny models of these carts that date to 6,000-5,000 years ago. The cart models, which may have been ritual objects or children's toys, were found at Altyndepe, a Chalcolithic and Bronze Age settlement in Western Central Asia near Ashgabat, Turkmenistan. Together with other finds, the cart models provide a history of how wheeled transportation first emerged in the area and later developed. "Horsepower" is a common term today, but the ancients had bull-power, followed by camel-power, researcher Lyubov Kircho explained to Discovery News. "I think that the carts pulled by bulls were mostly used in agriculture in the 4th millennium, when the climate was more humid," said Kircho, who is at the Institute for the History of Material Culture at the Russian Academy of Sciences. His study, published in Russian, appears in the journal Archaeology, Ethnology and Anthropology of Eurasia. An English version has been accepted for publication in the Proceedings of the 19th International Conference of the European Association of South Asian Archaeologists.
Posted by Jan at 11:42 AM