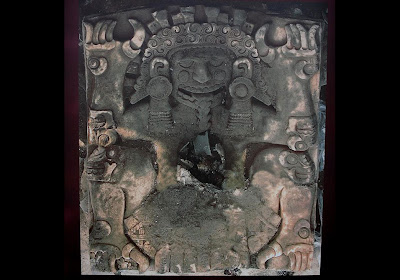 From Art Daily: (Image: Tlaltecuhtli Monolith. Photo: Hector Montaño/INAH.) MEXICO CITY.- Cult to dual deity Tlaltecuhtli (lord/lady) among Mexica people was restricted to priesthood, as pointed out by archaeologist Eduardo Matos Moctezuma, who remarked that despite the great impact it had in Aztec worldview, as birth and life giver, there is no temple known to present devoted exclusively to Tlaltecuhtli. During his participation in the conference series “Gods in Codices” organized by the National Institute of Anthropology and History (INAH), Matos Moctezuma remarked that according to sources, there is no register of Tlaltecuhtli festivities in Aztec calendar, although it is considered one of the most important deities of Mexica pantheon. For what is known through codices, the cult to this deity was reserved to priests who were in charge of presenting the offerings. The INAH emeritus professor commented that at present there are more than 40 Tlaltecuhtli representations, outstanding the zoomorphic, feminine one, with her mouth open, showing her fangs; the joints present a skull mask, she has claws, and her legs are open. Her main function was to devour corpses. “Tlaltecuhtli devoured and then gave birth to them through her womb, wherever their destiny pointed out. The deity had the dual function of consuming and giving birth to earthly beings. She had a great impact in Mexica society, awakening fear and respect as Kali in India” declared Matos Moctezuma. “Tlaltecuhtli is also represented as part of other Aztec deities; for instance, she appears on the inferior side of Coatlicue monumental sculpture exhibited at the National Museum of Anthropology, as well as on the bottom of the Chac Mool found in 1947 in Guatemala Street, Mexico City”, he pointed out. In other feminine representation, the most abundant, the dual deity shows her back, because she is essentially with her chest on the ground. In the masculine representations, the same iconographic elements appear but showing the front, mentioned the archaeologist. At the conference series developed by the National Library of Anthropology and History (BNAH) the archaeology doctor pointed out that according to recent investigations, we now know that Tlaltecuhtli sculptures were deposited face up or upside down, when carved on great blocks; if represented on vessels, it occupied the inferior side, because it had to be facing the ground. The Tlaltecuhtli monolithic sculpture found in front of Templo Mayor in October 2nd, 2006 is 4 meters high by 3.5, approximately 40 centimeters thick, and weights 12 tons. Its size allows perceiving the magnificent carving, outstanding the huge mouth from where a blood torrent exits, and a skin covering, concluded Matos Moctezuma.
Posted by Jan at 9:11 AM

...tecuti(N)=become lord=
tecutli(N)=lord. ometecutli,
2 lord, supreme being, created
fire, heaven, water, then earth
by creating señor tierra, whose
special office is to punish adultery. when a wild toad
with fangs, it's lady earth,
mouth up, jaws open meaning
omnivorous everything. when
someone is born or dies reverence
is made to the god/goddess bowing
down and taking a fingertip of
dust and putting it to one's lips.
the lady warrior version of the
earth female=itzpapalotl, who
is in diving position, head on the
ground, body above, skullface, and
claws on her feet, hands, elbows,
and knees. she is chief of ladydarts, women who die in first childbirth and want revenge on living children the first days
of the western/ciuatlampa cuadrant.
women are warriors as the child is
their prisoner and aztec war was
alined to the birthing principle:
bring your prisoner in alive and
unblemished for the gods.
cihuacoatl/lady snake is another
chthonic/chitoni(N))sparky goddess,
whose name served as title of the
aztec defense minister. her other
name is coatlicue, chaste mother of
huitzilopochtli, the wargod. in
her old age she sweeps a temple,
finds a ball of feathers and tucks
it in her waistband, shades of
zeus the cuckoo with sister hera,
finds herself pregnant with huitz,
he is born as the sun on the mountaintop as her children, 400(innumerable)stars and moon close
in threatening her, but the sun,
huitz=thorn hummingbird is born
fully armed(like athena), eclipses
the stars and quarters his sister,
the moon/coyolxauqui(N)=cascabelle.
coatlicue/snakeskirt is the first title/advocación(sp) of omecihuatl as goddess of earth.
the social structure of the gods
and goddesses is monogamous, as one
would expect from nomads, the word
marriage is the word, name(E)=
namiqui(N)=lit,4death(to the death), and adultery is punished
the same way, with a mock wedding
ceremony of the 2 culprits and
their subsequent death, usually
by dropping a large stone on their
heads timed by a shrill whistle
in the form of the screech owl
with double mouthpiece,a separate tone to signal the fall of each
one. the stone usually dropped
by the offended party of each pair.