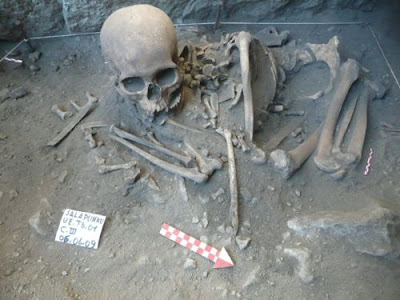 From Andina: (Image from site) Ancient tomb found in Machu Picchu archaeological park Lima, Jun. 17 (ANDINA).- Archaeologists at the National Institute of Culture (INC) have found a pre-Inca tomb in the Salapunku archaeological site, located inside the Machu Picchu Archaeological Park in Cusco, southeastern Peru. Archeologists said the unearthed remains were most likely of an adult female dating back to the ancient Killke culture. The group inhabited the region from 900 to 1200 A.D., prior to the Incas. Francisco Quispe is leading excavations in the ruins. He says the funerary ceramics and bird skeletons also discovered in the tomb are strong indications that the grave belonged to the Killke. Francisco Quispe said, "The most important discovery regarding this tomb was that it was closed, meaning it corresponds very likely to a female." The tomb was discovered in a rocky area alongside a mountain called Wakaywillka considered by pre-Hispanic populations as the guardian of the Vilacanota valley. Archeologists have unearthed nine other graves in the same area. Quispe says the tomb was positioned differently from regular ones. Francisco Quispe, archeologist, said, "The location of this tomb is also very important. In an archeological monument, the tombs are always facing the extremes because when they die, their remains serve as guardians of the monument. In this case, the monument is beneath it." The Inca empire is based in the city of Cuzco -- Peru's top tourist destination. The area is also the launching point for the ruins of Machu Picchu considered one of the new seven wonders of the world. The archaeological site of Salapunku is at 2,631 meters above sea level in the foothills of the La Veronica mount and it occupies an area of 229.420 square meters. (END) FZC/JOT/AVC
Posted by Jan at 10:05 AM