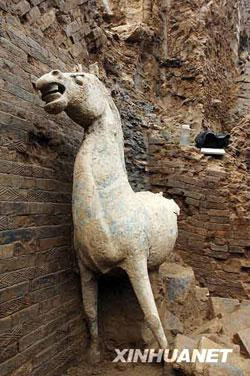 (Image: from the original excavation in 2008) An interesting article, with a very good video in English, about how this extraordinary 1,700 year old bronze cast horse is being repaired after its excavation in 2008. Excavated bronze horse statue repaired in Hubei www.chinaview.cn 2009-06-21 20:25:42 BEIJING, June 21 -- The back part of China's largest bronze horse, excavated at the end of 2008 from a tomb of Wei or Jin Dynasties, dating back 1,700 years, was destroyed. But now, through half a year's efforts of archaeologists, the horse statue has been successfully repaired as a whole. The 162-cm-tall and 161-cm-high relic weighed a ton before being repaired. With a unique style and realistic shape, it is about the same size of a real horse. Archaeologists speculated that the bronze horse might be cast in term of the favorite horse of the tomb's host. As the biggest bronze horse statue ever found in China, it is of great value on archaeological and historical research. When unearthed, the bronze horse was just consisted of its front part, two hind legs, half a tail and some remnants. With reference to outline features, historical materials and remnants of horses from East Han to Wei and Jin dynasties, archaeologists finally reshaped it successfully. The bronze horse has characteristics of early Mongolian horses, such as thick neck, round buttock and short legs, said Yi Zelin, archaeologist of Xiangfan. Experts say it is so amazing that the lifelike statue is still a semi-finished article shaped with mud. Only mud and some remnants could be used for the repair. The workers built a steel frame in the horse's belly and shaped the horse with wet mud step by step, which was the most crucial part of the repair. We plan to get its shape exactly with plaster cast outside and next is to cast it with polymeric and alloy material. The final step is to make it as the ancient one through relevant techniques, said Yi. To make it seem like an antique, the back part also needs to be cast with bronze. Archaeologists may have more and more technical difficulties in the future. Xinhua news agency correspondents reporting from Xiangfan. Editor: Mo Hong'e
Posted by Jan at 8:45 PM