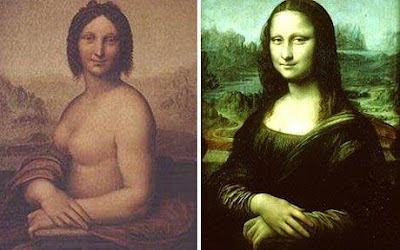 Well, judge for yourself... From the Telegraph.co.uk Naked Mona Lisa goes on show A naked portrayal of the Mona Lisa, which was once attributed to Leonardo da Vinci, forms one of the highlights of the biggest exhibition ever held on the Renaissance genius. By Nick Squires in Rome Published: 7:04PM BST 15 Jun 2009 The mysterious portrait of a semi-nude woman, looking straight at the viewer with an enigmatic smile and with her hands crossed, bears a remarkable resemblance to Leonardo's world famous painting. Hidden for almost a century within the panelled walls of a library, the portrait appears to have been inspired by the Mona Lisa, which hangs in the Louvre Museum in Paris and was painted by the Italian master in the early 1500s. It will form one of the centrepieces of a new exhibition at the Museo Ideale in the Tuscan town of Vinci, near Florence, where Leonardo was born in 1452. "The frontal look, the position of the hands, the spatial conception of the landscape, with columns at the sides, show a clear link with the Mona Lisa's iconographic theme," Alessandro Vezzosi, director of the museum, told Discovery News. The naked portrait once belonged to Napoleon's ambassador to the Vatican, Cardinal Joseph Fesch, and was rediscovered after being hidden inside the walls of his private library for nearly a century. Art experts believe the portrait of the topless woman was probably not painted by da Vinci, but that the artist may have painted a similar picture, now lost, which then inspired one of his imitators to create this work. "I think it is very likely that Leonardo da Vinci conceived a naked Mona Lisa," said Carlo Pedretti, a world authority on da Vinci. The exhibition, which opened at the weekend and lasts until Sept 30, consists of more than 5,000 works spanning 500 years which were inspired by the Mona Lisa, including paintings, sculptures and new media images. The exhibition will look at why the painting, known in Italy as La Gioconda, became such a famous icon. It will explore the history of the painting, including the possible identity of the woman who posed for Leonardo, and the latest scientific research into the portrait. See also Nude Mona-Lisa Like Painting Found at the Huffington Post, which has a little bit more information not so sensationalized. Interestingly, among the comments it was pointed out that this painting could be worth twice as much as the actual Mona Lisa! It's amazing to me that this inferior painting could potentially be worth more than the Mona Lisa. Geez.
Posted by Jan at 10:20 AM