This Little Thing is Worth - Ohmygoddess! 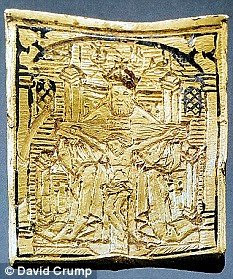 From the Mail Online The beep that made me leap: Housewife discovers £250,000 gold treasure after seven years of hunting with a metal detector By Dalya Alberge Last updated at 11:18 PM on 24th June 2009 (Image: (c) David Crump. Tiny: The 2.8cm by 2.3cm treasure) After seven years of combing fields and beaches with a metal detector, the only thing housewife Mary Hannaby had to show for her hobby was an old dental plate. But all those efforts paid off when her first proper find turned out to be a 15th-century gold treasure valued at £250,000 or more. The find is thought to be part of a high-quality reliquary or pendant, and depicts the Holy Trinity. Mrs Hannaby, 57, from Hemel Hempstead, Hertfordshire, heard her metal detector's tell-tale beep while out on one of her regular six-hour Sunday detecting walks with her son, woodcarver Michael, 33. For 500 years, the treasure had lain buried four inches below the ground, despite repeated ploughing. The discovery is all the more astonishing as this was not the first time the Hannabys had scoured the arable field between Ashridge and Great Gaddesden. 'You get a buzz every time you get a signal, but chances are it won't be anything,' said Mrs Hannaby. 'This time, it popped up all of a sudden,' said her son. 'You can literally miss things by inches. We couldn't believe it. We always dreamed of finding treasure.' And the pair struck gold again when the landowner refused Mrs Hannaby's offer to split the money equally and said he wanted only 30 per cent, saying he would never have known about the treasure if not for her. Under the Treasure Act of 1996, finders must report potential treasure such as gold and silver objects more than 300 years old. Finders are offered the market value for their discoveries which museums have first option to buy. At 2.8cm by 2.3cm, the treasure is barely larger than a postage stamp, but its importance is exciting experts. Roger Bland, head of treasure at the British Museum, describes it as an 'important find', and regrets that the museum does not currently have the funds to buy it. Carolyn Miner, sculpture specialist at Sotheby's, was 'awestruck' when the Hannabys first showed the treasure to her and will auction it in London on July 9. As one of only three of its kind to have survived, the find could be worth even more than £250,000, and its engraving is being compared to that of the Middleham Jewel, which sold at auction for £1.3 million in 1986 and was later resold to the Yorkshire Museum for £2.5 million. Former pub kitchen worker Mrs Hannaby hopes the sale proceeds will pay off her mortgage.
*******************************************************
Unbelievable that such a small piece could potentially be worth that much money. It doesn't appear to be even well done technically wise, compared, for instance, to some Scythian gold pieces I've seen that are a couple thousand years older. Ach!
Posted by Jan at 9:22 PM