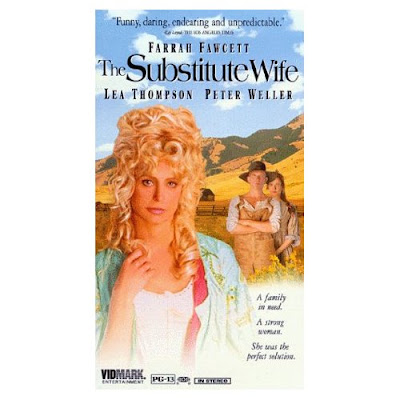 Farrah Fawcett died today. I will always remember Farrah's performance in a made-for-tv movie I saw years ago. I couldn't remember the name of the movie or what year it was, but I found it at Amazon.com: "The Substitute Wife." She played a worn-out prostitute who was recruited by a farmer in the 1880's or thereabouts, whose wife was dying. The wife had sent him out to find a replacement woman who would take over as his wife and mother to their several children once she had died. I thought it was the best thing Ms. Fawcett ever did. Nuanced, hard and vunerable at the same time, proud and humble, weary-wise and yearning for love, that finally came, when all thought and hope had long since vanished from her life. Two VHS videos of this movie are going for $146.99 while I'm writing this. I suppose more may come on the market now, and the price will go even higher. Like lots of other people back then, I watched "Charlie's Angels." I wasn't particularly a Farrah fan (no sex appeal for me!), but I liked Kate Jackson and I thought the most beautiful of the three original Angels is Jaclyn Smith. The three of them together were (to steal a phrase) DY-NO-MITE!
Posted by Jan at 8:50 PM